Sunday of the Myrrh -bearing Women 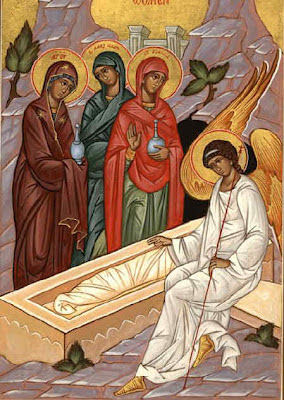 In the Name of the Father, the Son and the Holy Ghost.
We remember today the Myrrh-bearing women, Joseph of Arimathea and Nicodemus, people who in the course of the Gospel are hardly mentioned, yet who, when Christ was seemingly defeated, when death, rejection, betrayal and hatred had conquered, proved to be people of faithfulness and courage, the faithfulness of the heart and the courage that can be born only of love. At the moment of the Crucifixion all the Apostles had fled save one, John, who stood at the foot of the Cross with the Mother of God. Everyone else had abandoned Christ, only a small group of women stood at a short distance from the Cross, and when He had died, they came to anoint His Body which Joseph of Arimathea had sought from Pilate, unafraid of being recognised as a disciple, because in life and in death love and faithfulness had conquered.
Let us reflect on this. It is easy to be Christ's disciples when we are on the crest of the wave, in the security of countries where no persecution, no rejection is endured, no betrayal can lead us to martyrdom, or simply to becoming the victims of mockery and rejection.


Let us think of ourselves not in regard to Christ alone but with regard to one another, because Christ has said that what we have done to any one of us, to the smallest, to the most insignificant, we have done to Him.
Let us ask ourselves how we behave when someone is rejected, mocked, ostracised, condemned by public opinion or by the opinion of those who mean something to us, whether at that moment our heart remains faithful, whether at that moment we find courage to say, ‘He was, and he remains my friend whether you accept or reject him’. There is no greater measure of faithfulness than that faithfulness which is made manifest in defeat. Let us consider this, because we all are defeated, we are defeated in so many ways. We all strive, with whatever energy we have - a little or much, to be what we should be, and we are defeated at every moment. Should we not look at one another not only with compassion, but with the faithfulness of friends who are prepared to stand by a person who falls, falls away from grace, falls away from his own ideal, frustrates all hopes and expectations which we have set on him or her. At that time let us stand by, at that time let us be faithful and prove that our love was not conditioned by the hope of victory but was a wholehearted gift, gratuitous, joyful, wonderful. Amen.
agiazoni.gr