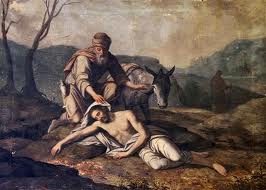 A certain man was traveling from to the city of . He was a peaceful and hard working man, who was struggling for his daily bread and caring about his family. On his way, he suddenly fell into the hands of thieves. What can anyone expect to follow? They stripped him of whatever he had, they mistreated him with cruelty, they wounded him and abandoned him in the midst of the desert, lying down in his own blood and half dead without any help.
In today’s Holy Gospel reading our Lord and Saviour Jesus Christ, the Son of God, gives us the example of the suffering man, who fell in the hands of evil thieves. He was stripped from every good thing that he possessed. He is the man, who departed from the sacred law of God and was abandoning the holy city of , , in order to go to the city of sin, . Thus, he brought upon himself the sufferings which he endured.
The priest and the Levite, although, are close to the scene and they have seen what had had happened, yet, they do nothing! They do not want even to look upon the man and they leave him and depart in a hurry! They flee from the crime scene! They flee from their duty! This is what many typical religious people do today: They, who suppose to be religious, are in reality only typically. They are those people who, through religion, seek worldly glory from men, instead of seeking the glory which is offered by God. They live not according to the Orthodox Christian Faith and virtues, but in accordance of their own vain glory, self-love and self-satisfaction.
Today, how many times we see the sufferings of our fellow man? How many times we hear the sigh and we notice the tears of the ones who are in pain and suffering, and we abandoned them, saying: “I have no time for them”, in order that we do not miss our pressure and valuable time!  Or, in order that we won’t spend few of our money! Or, in order that we might not get tired and suffer for the sake of our fellow man! Thus, we depart from the crime scene and do not perform our good and righteous duty.
Read more »
στις 03:13 No comments: