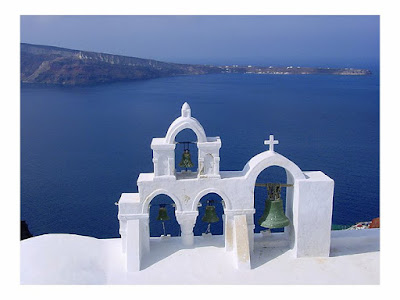 The Church is the body of Christ, which is comprised of all those faithful in Christ; of those who participate in the first resurrection and who bear the betrothal of the Spirit or even those who have foretasted theosis (deification). The Church has existed even before Creation, as the kingdom and the glory that is hidden within God and in which God resides, along with His Logos and His Spirit. By a volition of God, the aeons were created, as were the celestial powers and the incorporeal spirits or angels therein, and thereafter, Time and the world within it, in which Man was also created, who unites within himself the noetic energy of the angels with the logos-reason and the human body.
The Church is both invisible and visible; in other words, She is comprised of those who are enlisted (in active duty) on earth and those who are in the heavens, that is, those who have triumphed in the glory of God.
Among the Protestants there prevails the opinion that the Church is invisible only - whereas the sacraments of Baptism and the Divine Eucharist are merely symbolic acts - and that only God knows who the true members of the Church are. The Orthodox Church, on the other hand, also stresses the visible aspect of the Church. Outside the Church, there is no salvation.
The Church, as the body of Christ, is the residence of God’s uncreated glory. It is impossible for us to separate Christ from the Church, as it is to separate the Church from Christ. In Papism and Protestantism there is a clear distinction between the body of Christ and the Church; that is, one can participate in the body of Christ, without being a member of the Papist church. This is impossible for Orthodoxy.
According to the Calvinists, after His Ascension, Christ resides in heaven and consequently, the transformation of bread and wine into actual Body and Blood of Christ is impossible…. A complete absence of Christ…. Approximately the same thing is highlighted in the Papist church, because, Christ is regarded as absent, and through the minister’s prayer, He descends from the heavens and becomes present. This implies that Christ is absent from the Church. Members of the Church are –as mentioned previously- those who have received the betrothal of the Spirit and the deified ones.
When the ancient Church referred to the body of Christ as the Church, and Christ as the Head of the Church, they of course did not mean that Christ was spread out bodily all over the world and that He –for example- had His Head in Rome, the one hand in the East and the other in the West, but that the whole of Christ exists in every individual church with all its members, i.e., the Saints and the faithful of the Universe. In this way, according to the teaching of the Fathers, when we perform the Divine Eucharist, not only is Christ present, but all His Saints and the Christians of the Universe are present, in Christ. When we receive a tiny morsel of the Holy Bread, we receive all of Christ inside us. When Christians gather together for the same reason, the whole Church is gathering together, and not just a fraction of it. This is the reason that it has become predominant in Patristic Tradition to refer to the temple of a monastery as the “Katholikon”. The destination of all the faithful is theosis (deification). This is everyone’s ultimate objective. This is why a Christian must proceed “from glory to glory”; in other words, the slave must first become a salaried worker, then a son of God and a faithful member of Christ. There cannot be salvation outside the Church. Christ offers redemptive grace to all people. When one is saved outside the visible Church, it means that Christ Himself has saved him. If he is a heterodox member then he is saved because it was Christ who saved him, and not the religious “offshoot” that he belongs to. His salvation therefore is not effected by the ‘church’ he belongs to, because One is the Church that saves - and that is Christ.
Wherever the Orthodox dogma does not exist, the Church is in no position to opine on the authority of the sacraments. According to the Fathers, the Orthodox Dogma never separates itself from spirituality. Wherever there is an erroneous dogma, there is an erroneous spirituality and vice-versa. There are many who separate the dogma from piety. That is a mistake. When Christ says “become ye perfect, as the Father is…” it implies that one must be familiar with the meaning of perfection. The criterion for the authority of the sacraments for us Orthodox is the Orthodox dogma, whereas for the heterodox, it is Apostolic Succession. For the Orthodox Tradition, it is not enough to trace one’s ordination back to the Apostles, but to possess the Orthodox dogma. Piety and dogma are one identity and cannot be separated. Wherever there is upright teaching, there will be upright action. “Orthodox” means:
a) upright glory,
b) upright act.
The terrestrial, actively engaged Church is the Orthodox Church. “Orthodox dogma” and “Scriptural teaching” are one and the same thing, because the dogma exists, and it comes from within the Holy Bible.

Behind every test lurks the blessing of God

Almost all attribute their conversion to some ordeal.
Sorrow is not nice. However, behind it, behind the pain, behind the sorrow, behind the test, lurks the blessing of God, the rebirth, the reforming of man, of family. Almost everyone attributes his/her conversion to some test. They believe everything goes well, then God takes their child, and then there is mourning, pain etc. Then comes the grace of God which overshadows them, making these people calm. They approach the Church, approach the confession, approach the priest. Thanks to that child they go to the Church. Their pain makes them to seek, to pray for repose, to request liturgies.
Pain relieves the heart and makes it receptive to the word of God, while earlier it was hard and unreceptive. For example, a man during his youthful exuberance thinks, "I am and no one else is". There go the degrees, the glories, the health, the beauty and everything else. However, when he is laid in bed sick, he thinks differently. Vanity of vanity, everything is vanity. I may die, he thinks. What is the benefit of all these and he starts to think differently. It is like a man approaching him and tells him, "read this book and check what it says". He hears a word of God and then he listens to it. And if you give him a book, his pain has already made his heart suitable and he opens the book and the Bible and reads it and thus starts the repose of man. And when he is healed, immediately then he stands up and lives carefully his life and does not live like before with pride and with the fantasy he had.
Sickness and sorrow is by and large medicine of the providence of God to bring man closer to Him and increase his virtue.
The sickness and sorrow is by and large medicine of the providence of God to bring man closer to Him and increase his virtue. Job was the best man on earth but God wanted to make him even better. Before he was tested, Job was not famous. As soon as he was tested and fought, struggled, crowned and became rich, after that began his glory to this day. His example is the most brilliant one and empowers every man that is being tested. If he was tested being a saint, so much more us who are sinners. The result was he was made holy and was given again years of life and blessed him doubly and thrice with what he had, thus becoming a bright example throughout the centuries and for him to relax and say: "As the Lord wished so it happened. May the name of the Lord be blessed". He lowers his head and says: "God gave and God took" And even if He took my child, hasn't God given him to me? He took it. Where is my child? In heaven? So what happens there? He reposes there.
Behind every test lurks the will of God and the benefit which naturally he could not see at that time, but with time he will know the benefit. We have many such examples.
Like also the Saints Andronicus and Athanasia. They were a couple. He was a jeweler of great wealth etc. Part of his profit from work was used to feed his family. Another part of his profit he gave to the poor and a third of his profit was lent to people who had no money, interest free. They had two happy daughters. One day both died from sickness. Both parents went to bury them. Athanasia, the unfortunate one, would cry inconsolably over their graves. So did Andronicus. With great pain he started for home. Poor Athanasia stayed behind to mourn over their graves. "My children" and "My children" she cried. The sun was setting and the cemetery was closing. In her sorrow she saw a monk coming to her and telling her: "Lady why are you crying?"
How could I not cry Father?" (She thought he was the priest of the cemetery). "I buried both my children, my two angels, I laid them in their graves and I and my husband are left alone. We have no more freshness anymore.
He tells her: "Your children are in paradise with the angels. They are in the joy and grace of God and you cry? Pity, and you are a Christian.
"So they live my children? Are they angels?"
Of course your children are angels"
He was the Saint of that Church. Finally both Andronicus and Athanasia became monastics and were sanctified.