The icon of the Mother of God “Milk-Giver” 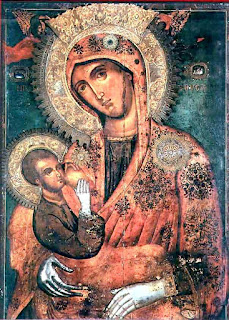 Type: Galaktotrophousa
One of the earliest extant of this subject matter is found in the church of the Karyes hermitage, belonging to the Hilandar Monastery on Mt. Athos. According to oral tradition, this icon eas originally in the Lavra of Saint Savvas, 18 versts from Jerusalem. On his deathbed Saint Savvas the Sanctified (d. 513) foretold that a royal son of the same name would come to the monastery and that at the moment of his praying tribute to the tomb the tied up episcopal staff of Saint Savvas would fall to the ground. He bequeathed the wonder-working icon of the Mother of God Galaktotrophousa
And the staff to the future monk with the name Savvas, as his blessing. Five centuries later the prophecy of Saint Savvas the Sanctified came true. The Serbian monk Sava Nemanja (d. 1236) came to the Lavra in Palestine. While he was paying tribute to the saint’s tomb, the episcopal staff fell down. When the miracle repeated the next day all doubts of the monks were gone. They knew for sure then that the Serb Sava was the one they had waited for. Returning to Serbia, Sava transferred possession of the icon to the Hilandar Monastery.
It is interesting, that, contrary to common practice in the Eastern Church, this sacred icon was placed, and remains till now, in the local row of the iconostasis, not on the left side of the Beautiful Gate, but on the right side where ordinarily the icon of Holy Trinity or the Savior is installed. The image of the Lord Almighty occupies the place on the left side where ordinarily there should be the icon of the Mother of God.
The icon’s miraculous power has been known in Russia since 19th century. In 1860, in the Kursk Gubernia a sick man who had been bedridden and unable to move for at least a year suddenly recovered when he kissed a copy of the holy image sent over from Athos. In 1862 the house of a certain believer was twice delivered from a fire due to his prayers before the icon.
στις 18:48 No comments: