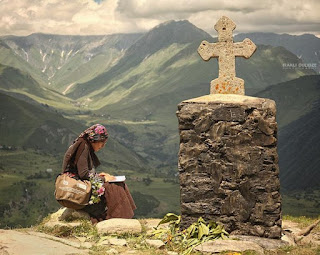 “A few years ago, I was the parish priest of St. Vasileios church (Piraeus) and was called to hear the confession of a young man, Xenophon, 42 years old.
When I arrived, his days were numbered. Cancer with rapid metastases had affected his brain too. He was all alone at the ward, the bed next to him was empty, so we were all alone.
This is what he told me about how he came to Faith, since he was a “hardened atheist” in his own words:
‘I arrived here about 35 days ago, in this ward of two beds. Next to me was another patient, about 80 years old. He was suffering from cancer too, in his bones, and although he was experiencing excruciating pain, he was constantly praising the Lord “Glory to God! Glory to God for all things!” He also recited more prayers which I heard for the first time in my life since I was an atheist who had never set my foot to church.  Often, all those prayers comforted him and he slept for a couple of hours. Then, after 2-3 hours, he woke up again from the excruciating pain, and he would start over “My Christ, I thank you! Glory be to Thy Name! Glory to God! Glory to God for all things!” I was moaning with my pain, and this patient at the next bed to mine was glorifying God. I was blaspheming Christ and the Theotokos, and he was thanking God, thanking him for the cancer which he had given to him, and for all the excruciating pain he was suffering.
I was so rebellious and indignant at this! Not only for the excruciating pain I was suffering, but also for his never-ending Doxology. He was also partaking daily of Holy Communion, while I was throwing up in disgust.
– ‘Will you please shut up! Shut up and stop saying all the time ‘Glory to God’! Can’t you see that this God, Whom you are thanking and glorifying, this same God is torturing us with such cruelty? What kind of God this is? No, He does not exist!’
Read more »
στις 15:51 No comments: