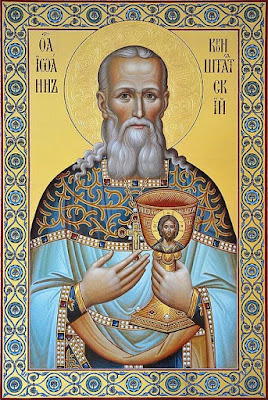 ‘The blessed people of God would not betray their faith not even with one word".
Following the evening prayers, being tired, I laid down for a while to relax in my poorly lit cell. My lampada was hanging in front of the icon of the Mother of God. Half an hour had hardly passed when I heard a creak. Someone touched my left shoulder and with a gentle voice told me, "rise servant of God John, and follow the Will of God!"
I rose and I saw near the window a glorious elder (staretz) with grizzly hair, wearing a black mantia  and holding a cane in his hand. He was looking at me tenderly and I had difficulty standing up because of my great fear. My hands and feet trembled, I wished to talk but my tongue would not oblige. The elder made the sign of the Cross on me and soon I was filled with peace and joy. I then crossed myself.
In turn, he indicated with his cane the western wall of my cell, so that I would observe a specific sign. The elder had scratched the following numbers on the wall: 1913, 1914, 1917, 1922, 1924 and 1934. Suddenly the wall disappeared and I walked with the elder in a green valley and observed a large number of crosses, in the thousands, as markers of graves.
They were wooden, ceramic or gold. I asked the elder what was the reason for the crosses. He answered peacefully, "the crosses were for those who suffered and were murdered for their faith in Christ and for the Word of God and became martyrs". We continued to walk.
Suddenly I saw a whole river of blood and I asked the elder, what is the significance of this blood and how much was spilled. The elder looked around and answered, "This is the blood of the true Christians!"  He then pointed at some clouds and saw a large number of lit oil lamps that burned with a white flame. They began to fall to the ground one after the other in tens and hundreds. Having fallen their light went out and they turned into ashes.
Read more »
στις 16:00 1 comment: