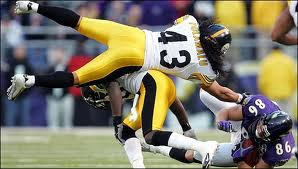 Christmas arrives today for many Orthodox Christians around the world
The most famous Orthodox Christian in Pittsburgh, if not the nation, has a greeting for his fellow believers today:
"Kala Christougena!" said Steelers safety Troy Polamalu. That's Greek for "Merry Christmas!"
Mr. Polamalu and his wife, Theodora, actually celebrated Christmas 13 days ago, but they keep the same Orthodox traditions as those who observe today. Most Orthodox celebrate on Dec. 25, but many Slavic churches tie liturgy to the old Julian calendar, which is 13 days behind the Gregorian calendar. The Greek Orthodox Church and some others have adopted the Gregorian calendar -- except at Easter.
"We all celebrate Easter on the same day," said Mr. Polamalu, 29. Orthodoxy is the Eastern wing of the earliest Christian church, which split into the Orthodox and Catholic churches in 1054.
He and Theodora converted to Orthodoxy about five years ago. His background was Catholic and Protestant, hers Muslim and Protestant. They were Christians in search of a deeper, more consistent experience of God.
"Orthodoxy is like an abyss of beauty that's just endless," he said. "I have read the Bible many times. But after fasting, and being baptized Orthodox, it's like reading a whole new Bible. You see the depth behind the words so much more clearly."
That fasting is a Christmastime difference between Eastern and Western Christians. While many Americans pile on the food from Thanksgiving to Christmas, Orthodox Christians start fasting Nov. 15 or 28.
"Christmas Lent" or "Winter Lent" lasts 40 days, broken by a feast on Christmas, said the Rev. Stelyios Muksuris, administrative assistant to Metropolitan Maximos of the Greek Orthodox Diocese of Pittsburgh and professor of liturgy and theology at Ss. Cyril & Methodius Byzantine Catholic Seminary. Slavic Orthodox keep a strict fast, abstaining from meat, dairy products, oil and fish for 40 days. Greeks usually permit fish, cheese and oil for the first few weeks, then fast strictly for the last two, he said. 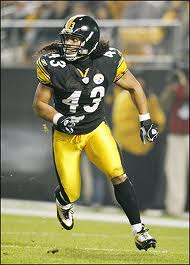 Mr. Polamalu is of Samoan heritage, and belongs to the Greek church, but fasts like a Russian.
His consists of a "fast from dairy, from meat and from oil for 40 days -- as well as from sex," he said. "It's to prepare you for the birth of Christ, of God incarnate."
Fasting doesn't affect his football fitness, he said. "When you fast, you can eat extremely healthy by eating a lot of light food, like fruits and vegetables."
There are other aspects to fasting.
"Maybe not watching as much TV, or not getting caught up in idle talk or different things, in order to keep you spiritually healthy," he said.
The most important Orthodox fast is Great Lent, for 50 days before Easter.
When he has kept longer fasts "I have never felt more spiritually strong," he said. Referring to great theologians of the early church, he said, "The church fathers have said that when you eat gluttonously or you eat a lot of meat, your passions get stronger, so your inclination toward sinning becomes stronger. ... [Fasting] really does soften your passions. It gives you spiritual insight."
In Orthodox theology "passions" are negative impulses -- such as sadness or greed -- that can harm the soul.
He doesn't claim that practicing the faith improves athletics. The player known for crossing himself on the field has seen his faith grow more from his injuries than his interceptions.
"When I got injured, I learned so much from it spiritually, just thanking God for the health that I had when I was healthy," he said.
"People have this idea that the more pious and devout I am, the more successful I am. Which is very dangerous. If you look at faith in that way, you're bound to fail at both -- spiritually and in your career."
As the Polamalus build Christmas traditions for their children, Paisios, 2, and Ephraim, 3 months, "It's become less about Santa Claus and more about the birth of Christ and the celebration of the Virgin birth," he said.
They spent Christmas Eve at an Orthodox monastery. The service lasted several hours, ending at 1 a.m. It was entirely chanted.
"Orthodox chanting is non-emotional, it's very monotone," said Mr. Polamalu, who also calls it "the most beautiful thing."
"It's the perfect environment for prayer," he said. "Chanting in Greek ... is like a beautiful opera, but way better. You have candles, not [electric] lights. It's dark. You have the women sitting on the left and the men sitting on the right. Everything is to keep your mind focused on God. ... To me the most beautiful thing anyone on earth can experience, other than maybe marriage and child-bearing, would be the Orthodox Liturgy." 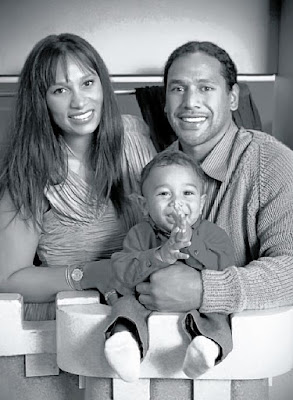 Before he became Orthodox, he said, songs in church sometimes moved him to tears. He now distrusts those passing feelings.
"I'd start crying and feel 'This is awesome.' If I'd had a Red Bull, I'd feel it even more. If I'd had breakfast, I'd feel good. If I didn't have breakfast, I didn't feel anything, I was grumpy," he said.
"It was a very superficial experience. I was thinking, 'God, why did I not feel you today?' because I wasn't feeling the music today. Orthodoxy is very sensitive to that, to take the emotion out of it, to really go after the heart."
The difference between the heart and emotion, he said, is like the difference between the deep love he has for his wife and their daily ups and downs.
"I could say, emotionally, I'm mad and sad with my wife. But that has nothing to do with how much I love my wife within my heart," he said.
"Before we were Orthodox we were able to separate our spiritual lives and our daily lives. Now that we're Orthodox, because of the prayer life that is required ... and the fasting, it consumes your life. It's the number one thing in your life."
Ann Rodgers Pittsburgh Post-Gazette: arodgers@post-gazette.com
Read more: http://www.post-gazette.com/pg/11007/1116221-323.stm##