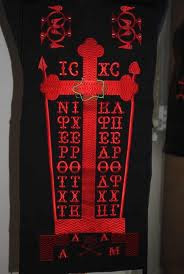 The ανάλαβος (Analab[v]os), which is the distinctive garment of a monk or a nun tonsured into the highest grade of Orthodox monasticism, the Great Schema, is adorned with the instruments of the Passion of Christ. It takes its name from the Greek αναλαμβάνω (“to take up”), serving as a constant reminder to the one who wears it that he or she must “take up his cross daily” (St. Luke 9:23). The ornately-plaited Crosses that cover the Analabos. the Polystavrion (πολυσταύριον, from πολύς, “many,” and σταυρός, “Cross”)—a name often, though less accurately, also applied to the Analabos—reminds the monastic that he or she is “crucified with Christ” (Galatians 2:20):
With regard to each image on the Analabos, the rooster represents “the cock [that] crew” (St. Matthew 26:74; St. Mark 14:68 Luke 22:60; St. John 18:27) after Saint Peter had “denied…thrice” (St John 13:38) Him Who lamented over Jerusalem: “How often have gathered thy children together, even as a hen gathereth her chickens under her wings, and ye would not!” (St. Matthew 23:37)
The pillar represents the column to which Pilate bound Christ “when he…scourged Him” (St. Mark 15:15) “by Whose stripes we were healed” (Isaiah 53:5; I St. Peter 2:24).