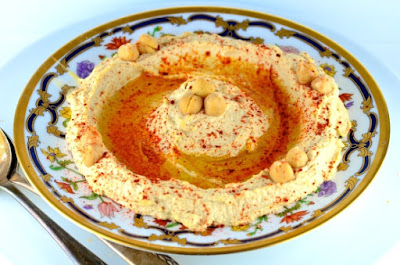 1½ cup dried chickpeas
4-6 cloves of garlic
125 ml olive oil
1 teaspoon salt for boiling chickpeas
1½ teaspoons salt in food processor
1 teaspoon ground black pepper
1 cup fresh parsley
1-2 squeezed lemons
¼ cup water if too thick when processing chickpeas
·           Soak chickpeas overnight in water 3-4 cm higher than the peas. Chickpeas can double in size when soaked.
·           Drain excess water off the next day (minimum of 6 hours soaking). Rinse in cold water, put into a pot and cover with water, add a teaspoon of salt, bring to the boil and simmer for 5 minutes. Turn off, drain off water and allow to cool.
·           Place parsley, 4 cloves of garlic, olive oil, salt and pepper into a food processor and make into a paste, 4-5 minutes.
·           Add chickpeas gradually
·           To taste – add lemon juice, a little more salt / pepper, and water if mixture is too thick, about ¼ of a cup
NB: Play with it by adding more garlic or other herbs if you want to J
στις 01:23 No comments: 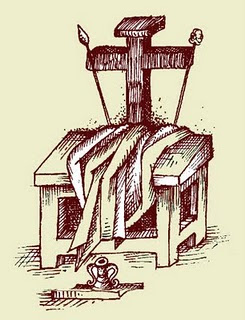 
In the Name of the Father, the Son and the Holy Spirit. Amen.

I have been asked to give a couple of sermons on Confession. This is my second sermon on the subject.
When we come to Confession we come to meet a friend face to face. We are not coming to be judged and condemned. We do not come in terror of what will happen. We come to the One who, being God, beyond suffering, beyond death, has chosen, for the love of us, to become Man, to take upon Himself all our human destiny and to give His life for us. His life, His death are to us evidence that we are so loved of God that we can come up to Him whether we are good or bad with hope that He will receive us with open arms; that if anyone is to cry over our unworthiness and our sins it is Him, for compassion, for pity, for love - with a readiness, as He said in a vision to one of the saints, that if there was only one sinner in the world He would again become Man and again die for him, because He cannot endure the thought of anyone perishing.

This is the God, the Christ, to Whom we come when we come to Confession - to the One who is open to us with all His life and death; One who waits for us to come to be healed, to be consoled, to be supported - not to be condemned, not to be judged.

And then, what is the role of the priest? In the prayer which is read before Confession we are told, 'I am but a witness'. What does it mean? A witness to what? To the fact that you have come? That would not be enough. But if you think of what witnesses are: there are accidental, occasional witnesses. You are present in the street when an accident takes place. You are asked: what did happen? You are neither in favour of the ones or the others. You are just telling what your eyes have seen. It's for others to judge and to know.
There are other forms of witness. At times a friend of ours is brought to judgement. And we come to defend him, to testify for him, to save him. That's another kind of witness.

And then there is the witness which the Holy Gospel mentions speaking of St. John the Baptist: as the friend of the Bridegroom, the one who comes to the wedding, invited both by the bride and the bridegroom, because he is the nearest, the closest, to them both. And he is there to share their joy, the miracle of their encounter, the miracle of a blessing that will come upon them and out of two make one, unite them so that they are inseparable for ever in the mystery of eternal love, of divine love shared with them.
Read more »
στις 01:34 No comments: