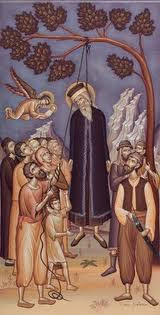 1.One day this will become Romaiko (Greek) and fortunate is he who will live in that kingdom.
(St. Kosmas would say this in different places in Greece, then under the Turkish yoke, that later on fought and acquired their freedom.)

2.Oh! Blessed mountain, how many souls, women, and children will you save during those difficult years.
(This prophecy was said in Siatista (northwestern Greece) and elsewhere where there were mountains. Women and children made them their refuge during the revolution.)

3.Those who will seek refuge up here in these high mountains will be fortunate; they will protect you from many dreadful sufferings. You will hear of but not see the dangers. You will suffer for three hours, or three days (prophesied by the Saint in Siatista).

4.That which is longed for will take place in the third generation. It will be seen by your grandchildren.
(This exceedingly important prophecy of the Saint, which nursed the sweetest hope of the enslaved Greek people, received astonishing fulfillment. For the years of the liberation of the Nation are in fact the third generation from the time when the Saint made this prophecy, isasmuch as is known, each generation is reckoned as twenty-five years.)