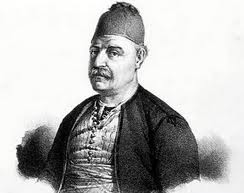 Miaoulis was born in Hydra in 1769 and died in Athens in 1835. He was from a naval family and entered into the trade very young, he became prosperous and built a large Corvette in Venice in 1802 and in 1804 he acquired the fireship "Heracles". He quickly earned everyone's respect with his brave actions against Algerian pirates who infested the Aegean Sea. In September, 1821 he ...was appointed Second-in-Command to the admiral Tobazes, while in February of 1822 he succeded him in the command of the fleet, following a series of successful skirmishes with the Turks. Miaoulis, in September 1822 vanquished the turkish fleet in Heli, near Nafplion. In October 1823, he won the naval battles of Artemisio and Chios and on August, 1824 he fought the historic Naval battle of Gerontas bay in Minor Asia against turkoegyptian fleet under admiral Givraltaris. In 1825 he defeated the Egyptian fleet. In 1832 he went to Munich as head of the delegation that offered Otto of Bavaria the crown. Otto later appointed him Commander of the fleet with the rank of Vice-Admiral.
στις 00:34