Sunday of the Myrrh-bearing Women 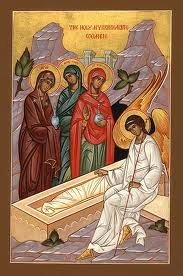 Christ is Risen! This is the third Sunday since Pascha, the Sunday of the Myrrh-bearing Women, and again our Church has the opportunity to praise…who else? The Risen Christ. It also celebrates the memory of those who witnessed the burial and Resurrection of our Lord, to assure us as it did on Thomas Sunday, of the Lord’s Resurrection which is the foundation of our faith and of our souls.

Here, from St Mark’s Gospel, which is read in Churches today, we read about the witnesses to Christ’s burial first, especially about St Joseph of Arimathea, who, on Holy Friday night, dared to go to Pilate and begged for the body of Jesus to bury it. We must admire the boldness of Joseph who was an important and official member of the Sanhedrin and a man of virtue and kindness and love and riches. He had a great social standing and was very moral. But he did not count this to be as important as his love for Christ who was dead. As the Gospel tells us, he too expected the Kingdom of God. Seeing its leader dead, he dared to ask permission from Pilate. Pilate gave it, having first been assured of Jesus’ death, by the Centurion. We also have another witness for Christ’s death, from the Myrrh-bearing women who were watching from afar.
Pilate gave the body to Joseph who loved Jesus Chris and sacrificed much for Him. He bought a new linen cloth, took Him down from the Cross and put Him a his own new tomb, which was hewn out of rock, and which no-one had yet used. This is the sign and love of Divine Providence, because the soldiers were guarding the entrance to the tomb. No-one could enter from anywhere else because it was made of stone, so there was no chance that the body would be stolen by the Apostles or anyone else. They placed a huge stone at the entrance and then Joseph left, a sad and suffering man.
Those who loved Jesus more than anyone else, however, the Myrrh-bearers, His Mother and the other women – Mary Magdalene and Mary the mother of James - were watching the place where He had been buried. They waited the entire Sabbath (Saturday) which was a day of rest and on what to us is a Sunday, and very early in the morning they took sweet spices and dared to go to the tomb. On the way, their main thought was of the large stone as they did not care at all about the soldiers or the Jews. When one truly loves, love expels fear. But when they arrived, the stone had been moved by the Archangel. He looked young, as angels are immortal and do not age – as is the same for us when we die and will rise again on the Second Coming. This Angel spoke to them of the Resurrection. “You came here out of love and boldness. And I boldly and with love announce to you the Resurrection of the Lord. He is risen, He is not here. Go and meet Him and tell His disciples and Apostles and Peter that he will meet them in Galilee.
They left, but were afraid as the Resurrection was not a natural phenomenon. Unnatural things leave us fearful and in awe. They were also very excited though, because of the Resurrection. And they told no-one other than the disciples and the Apostles. These Myrrh-bearing Women became the vessels of great love, the Apostles of the Apostles and the Women who spread the Gospel news.

Joseph’s boldness and brave act and the great love shown by the Myrrh-bearing Women teach us one thing – that we must be bold in things that are important and to do them with love and sacrifice. Then we will succeed. And what is more, we will attain the Divine Kingdom.