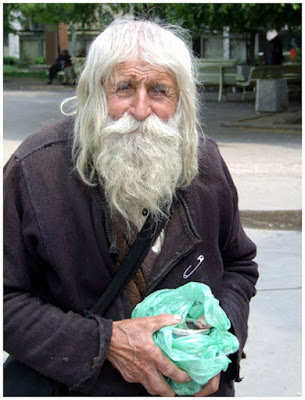 Holy souls live among living humans...
"I was under the impression that mister John was a theologian-professor. I surmised that, from his profound theological but equally simplified analyses.  He knew the entire Holy Bible by heart, and he would exhort me with faith to read one or two pages every day, from the Bible that he himself had given me as a gift.  He even counselled me to kneel before the icon of the Holy Mother every day and describe in detail the day's joys, sorrows and problems.
He used to say "Dear little Calliope, ask our Holy Mother to become your best friend and you will see everything changing around you. Our kind Mother is the kindest Mother of all, the kindest sister, the kindest friend. Talk to Her - She listens..."
Last night, when I rang up mister John and a gentleman who picked up the phone told me that mister John had died and informed me about the funeral, I felt as though I had just lost my father...
Mister Anastasy suddenly jumped up and asked:
--"When did you ring up?"
--"Last night, around 8pm.  I wanted to ask him if he was going to come this Sunday when it is my shift, because I have to confess that I trusted  mister John more than anyone else - even more than my own parents..."
--"But the apartment was locked since the day before yesterday, and I'm the only one who has keys to it", mister Anastasy said, mystified..
So he turned to the others in the room and asked if anyone else had keys. The replies were all negative...
--"But the voice on the phone sounded so much like mister John's. I just assumed it was a relative of his. But now that you mention it, I remember that he called me "little Calliope" over the phone - and he was the only one who called me by that name! Its just that at the time, I was so upset by the news of his death, that I didn't pay special attention, when I heard the following:
--"And now little Calliope, you will be looking after the children on your own, because your mister John has passed away, and can no longer visit you as a clown..." he said to me over the phone!
I assumed that his next of kin were aware of this activity of his, so I didn't take any notice of those words... I am only now finding out that he had no relatives, and I don't know what to say..."
Just then, father Dimitri who was observing everything in silence while seated at a nearby table, stood up and exclaimed:
"This man is a Saint !!!"