The Conqueror of death - documentary with subtitles


THE CONQUEROR OF DEATH - documentary with subtitles

The Conqueror of Death is a documentary film that describes the days of
the so-called Passion Week (the suffering Week, the week in which Christ suffered to death) and Sunday, the day that Christ has resurrected.
The film is designed so as to explain to a wider audience the implications of these events and the significance of the Resurrection of Christ, and therefore the meaning of Theanthropic feats of salvation.

The Divine Services and the Monastery life in the days of Passion Week and the Resurrection were recorded by Cinnamon production from Belgrade in Dečani Monastery (Kosovo and Metohia) between 2009-2012.

The significance of each of these days, in particular, is explained by quotations from the Gospel, from the liturgical texts of the Lenten Triodion of the Holy and Great Week, from the sermons of St. John the Chrysostom, St. Bishop Nikolai of Zhicha and St. Father Justin of Chelije.


Metropolitan of Montenegro and the Littoral, Amfilohie who at the time of working on one phase of the film in 2010 was the administrator of the Diocese of Raska and Prizren, in the film explains the meaning of all major events in the last week of Christ's life on earth, his suffering for us and the very significance of the Resurrection of Christ.
στις 16:13 No comments:

Email ThisBlogThis!Share to TwitterShare to FacebookShare to Pinterest
Ετικέτες movie

55 Maxims for the Spiritual Life. 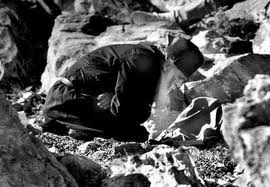 1. Be always with Christ.
2. Pray as you can, not as you want.
3. Have a keep able rule of prayer that you do by discipline.
4. Say the Lord’s Prayer several times a day.
5. Have a short prayer that you constantly repeat when your mind is not occupied with other things.
6. Make some prostrations when you pray.
7. Eat good foods in moderation.
8. Keep the Church’s fasting rules.
9. Spend some time in silence every day.
10. Do acts of mercy in secret.
11. Go to liturgical services regularly.
12. Go to confession and communion regularly.
13. Do not engage intrusive thoughts and feelings. Cut them off at the start.
14. Reveal all your thoughts and feelings regularly to a trusted person.
15. Read the scriptures regularly.
16. Read good books a little at a time.
17. Cultivate communion with the saints.
18. Be an ordinary person.
19. Be polite with everyone.
20. Maintain cleanliness and order in your home.
21. Have a healthy, wholesome hobby.
22. Exercise regularly.
23. Live a day, and a part of a day, at a time.
24. Be totally honest, first of all, with yourself.
25. Be faithful in little things.
26. Do your work, and then forget it.
27. Do the most difficult and painful things first.
28. Face reality.
29. Be grateful in all things.
30. Be cheerful.
31. Be simple, hidden, quiet and small.
32. Never bring attention to yourself.
33. Listen when people talk to you.
34. Be awake and be attentive.
35. Think and talk about things no more than necessary.
36. Speak simply, clearly, firmly and directly.
37. Flee imagination, analysis, figuring things out.
38. Flee carnal, sexual things at their first appearance.
39. Don’t complain, mumble, murmur or whine.
40. Don’t compare yourself with anyone.
41. Don’t seek or expect praise or pity from anyone.
42. We don’t judge anyone for anything.
43. Don’t try to convince anyone of anything.
44. Don’t defend or justify yourself.
45. Be defined and bound by God alone.
46. Accept criticism gratefully but test it critically.
47. Give advice to others only when asked or obligated to do so.
48. Do nothing for anyone that they can and should do for themselves.
49. Have a daily schedule of activities, avoiding whim and caprice.
50. Be merciful with yourself and with others.
51. Have no expectations except to be fiercely tempted to your last breath.
52. Focus exclusively on God and light, not on sin and darkness.
53. Endure the trial of yourself and your own faults and sins peacefully, serenely, because you know that God’s mercy is greater than your wretchedness.
54. When you fall, get up immediately and start over.
55. Get help when you need it, without fear and without shame.