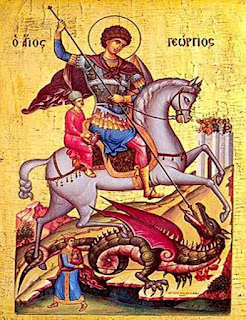 
In the year 296 A.D., during the reign of Diocletian, a man named George was appointed Commander-in-Chief of the Roman army in Asia Μinor. This man was later to suffer martyrdom and to become known as St. George the Great Martyr.
In the same year that St. George d his command, Diacletian began his persecution against the Christians. He launched a two-pronged attack against them. Those who agreed to foreswear their faith in Christ were promised high positions in the Empire, whereas those who refused to betray their Lord and Saviour were to be put to death.
At the time the decree suppressing Christianity was promulgated, St. George was travelling alone in Lydia (Asia Minor). Now in that part of the world there was a city, the citizens of which worshipped a large snake, which lived near the lake close by. Every year they would offer a young girl as a sacrifice to the snake, which was known as Dragon, the god of the lake. The annual sacrifice was about to take place and the young victim was already bound and left waiting at the entrance to the cave where Dragon lived. At that moment St. George happened to pass by. He immediately stopped and asked what had be fallen her. She replied that she was a οffering to the god of the lake. St. George reforted that that was iniquitous and that there was One True God, the Creafor of heaven and earth, and that He did not require human sacrifice. Bidding her to be brave and to hold fast, he promised to save her from the monster.
It was not long before Dragon appeared at the mouth of the cave and began attack­ing his prey. The moment he did this, St. George charged at him, and making the sign of the Holy Cross, ran him through with his lance and kilied him.
Read more »
στις 13:37 1 comment: