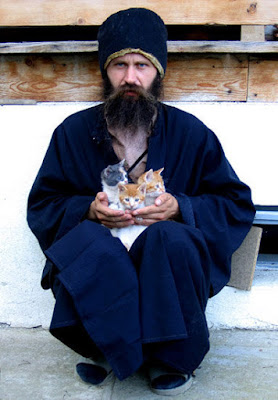 He begged for alms, to give them to others...
There are poor and unemployed who ask for help every day, but nobody can ever know what diamonds and holy souls are hidden behind every beggar that we meet.
He then went on to describe the incident with the money that he gathered from begging and deposited inside the charity box, which we described earlier on. I have many things to tell you, dear Christians, because I believe that the riddle has now been solved, and for this, I must thank mister Anastasy. I will narrate on ly one incident, and then I will let mister Anastasy take over.
"One afternoon, Crazy John was standing in front of the icon of the Holy Mother. I was in the office. I could hear him talking and I could hear -without seeing- that he was conversing with a woman, I paid no attention. When I came out of the office, I could see only Crazy John, and there was nobody else inside the church. The sacristan was away on an errand. Crazy John approached me and, after prostrating himself before me as he usually did, he said:
--'Father, you should go to Mrs.Stamata after Vespers. She is waiting for you to give her Holy Communion because her hours are numbered and she may not make it through tonight."