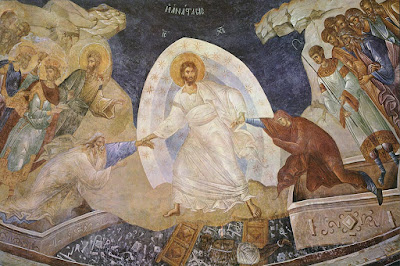 Christ is Risen! It is the Great Sunday of Pascha today and all of creation rejoices. The eternal (never waning) light has reached everywhere. To Hades, earth and heaven. Christ, who is the Light of the world, has risen from the dead, conquered Hades and death, and Satan and sin. From there on, the future belongs to Love, to Light, to Justice and to Paradise. The light of the Resurrection shines in and illumines every heart and every being which searches for the truth, for God and its true home.

The Holy Gospel extract read at the Divine Liturgy of the Resurrection refers to the pre-eternal existence of the Son and Word of God and His divinity. By the strength of His divinity, the Son of God resurrected the Son of man. This is a great miracle. The pre-eternal Word was, is and will be the Light, the light of the world, the light of our souls. This Light became incarnate and most ill-intentioned people, who are envious and greedy and selfish, did not accept this light. They preferred the darkness because that is what makes them comfortable. This is the greatest injustice for mankind and the greatest condemnation for his life.

God prepared the people of the time of His incarnation through St John the Forerunner, who was not himself the Light, but came to witness to the Light, to Christ. John spoke of important things and brought people to the great Light, to Christ. He prepared them to receive Him through repentance, love and kindness. “And to those who received Him, the Risen Christ, God gave authority to become His children”, we read in the Pascha Sunday Gospel. They became enlightened children of the Church. Christ had also told His disciples that “you are the light of the world”. And it is true that Christians are the light of the world. They, too, as second lights, illumine the darkness of souls and everywhere and at all times bring the divine Light to the lives of others, that un-waning light of the Resurrection.

The Holy Gospel continues, telling us that the Law was given through Moses. However, Grace and Truth was given by Jesus Christ. The eternal light of the Resurrection is the greatest grace for man, it is Truth itself for us, because when we lost Paradise we lost everything, entered into darkness, forgetfulness and oblivion. Christ came and lifted this forgetfulness – that is what truth is, a lifting of forgetfulness – and again illumined us and leads us again to Paradise.

The days which man is passing through, as also our beloved homeland, are difficult and distrustful. However, once again this year, the light of the Resurrection has risen, that eternal light of our Lord Jesus Christ. Let us all turn to It. East and West and the length and breadth of the earth and let us fall at the feet of the Risen Christ and let us ask Him to help us to know Him, to keep His light close to us and to experience the power of His Resurrection.