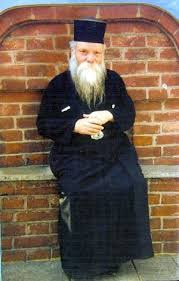 Elder Eumenios (in the world, Constantine Saridakis) was born January 1, 1931 in the Cretan village of Efia, to the family of the pious George and Sofia Saridakis. He was the eighth and last child in this poor family, which lost its breadwinner early. The difficult years of Nazi occupation in Greece did not allow little Constantine to receive an elementary education. Nevertheless, the boy stood out not only for his intelligence but also for his special piety. A wondrous event had a decisive influence on the future elder’s choice of path in life. It happened in 1944. During a festive dinner an extraordinary, blinding radiance appeared, which, as Fr. Eumenios later related, penetrated deep into his soul. Amazed and shaken by the divine light, the youth cried out, “I will become a monk!” Constantine’s path in life was foreordained. As the elder himself said, “If a person has a calling from God for something good, then God works and helps him.”
In 1951, Constantine Saradakis entered the monastery of Prophet Elias not far from his village. In that monastery, besides the abbot there labored two elderly, blind monks, whom the young novice served with great love. Three years later Constantine received the monastic tonsure with the name Sophronios.
Read more »
στις 19:30 No comments: