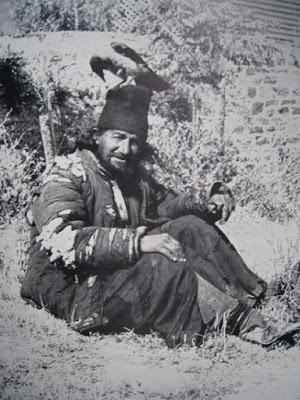 This excerpt was taken from the newly-circulated book about Crazy John, a modern-day ”Fool for Christ”
"Foolishness for Christ" was always appreciated as one of the most moving chapters in the voluminous Book of Saints of our Orthodox Church. One more pebble that was added to this chapter is the history that a humble levite of the Gospel who lives in the blessed mountains of Agrafa in Northern Greece narrated to us.
His narration pertained to a contemporary "fool for Christ", who lived in one of the many faceless, inaccessible and remote neighborhoods of Athens.
Crazy John - who is the central character of his narration - lived in a tiny, humble apartment that he had inherited from his mother; one of 20 apartments that comprised the condominium building.  He worked at the neighborhood bakery and began work at daybreak. From that bakery where he worked, he would customarily fill two bags with loaves of bread and bread rolls every day, and would rush to distribute them to the elderly men, women and students in his neighborhood.
«Here you are - I thought I might give you some freshly-baked bread, a gift from mister Apostoly the baker, so that you will commemorate him in your prayers" he would say.
The truth was that Crazy John would use up a large part of his wages to provide bread to the poor of his neighborhood.  He would tell mister Apostoly that he was only helping out some sick friends, and that he was being paid for his trouble...

But how did he know who the poor in his neighborhood were?
Well, he made it a habit to indiscriminately ring the doorbells, not only in his own condominium, but also in neighboring apartment buildings. He would introduce himself to everyone and would ask them if they needed anything that he could help them with: