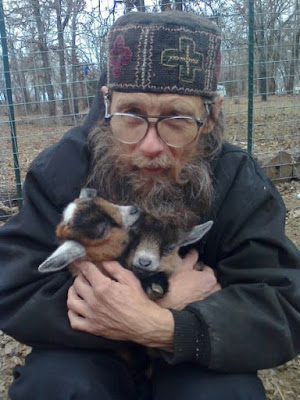 The fool's last letter...
He then pulled young Dimitri towards him and gave him a kiss, while patting him on the head.  His mother Polyxeni and her husband Panagiotis who were witnessing the scene were obviously emotionally charged.  Mrs Polyxeni then decided to say her part.
--"To us, Crazy John was the support of our family. He was the one who contributed towards us making the about-face towards Christ. Our life changed, and he made us partakers of the miracle of salvation. He brought blessings into our home...
To me, Panagiotis and my children, he was a friend and a brother. As his brothers therefore, we decided earlier on to suggest to you all that we get together next Saturday at our parish to perform the 3rd day memorial service and then you all come to our place to eat with us, to honour his memory."
Mrs Polyxeni's suggestion was welcomed by all of us. Mister Anastasy in fact spoke up again, to add that it would be good to continue the impromptu discussion that had begun in the Memorial Service Hall of the Cemetery, so he proposed to all the people who were present to write down their own experiences with Crazy John during their contacts with him.
Father Dimitri who happened to find himself among the mourners, addressed Mrs Polyxeni and said:
--"I never got to meet the departed brother John - that fool for Christ - however, I would like to ask you, if possible and if you have no objections, if I could come to your house and listen to this blessed expose of miraculous events."