Symbols of the Evangelists 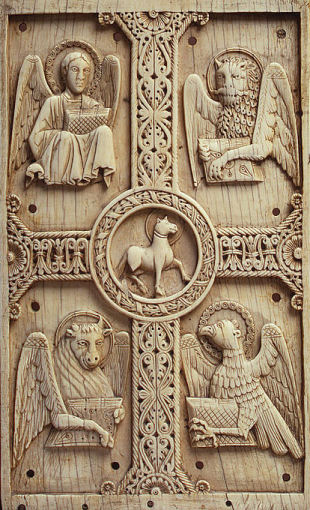 The four Evangelists are represented by four animals, it was considered that to them the prophecy referred to the prophet Ezekiel (A, 5-14). According to this the Prophet saw God sitting in cherouvika throne and the angels in the form of four animals (human, lion, calf and eagle) to sing: "Holy, holy, holy Lord Sabaoth 'full sky and the earth's your glory. "
The interpretation of this allegory of fathers who were involved in the correlation of Persons, has not always had the same effect. Finally accepted in the East and West's interpretation of St. Jerome, as explained below.
Matthew (of Twelve, November 16).
The first Evangelist, where painting, appears to have close to a human form (man, the King of creation) the first of the symbolic animals of Ezekiel. The symbolism is mentioned in Matthew because his Gospel begins the genealogy of the flesh of Jesus Christ.
Mark (student of St. Peter, April 25).
The Gospel is symbolized and painting a lion (the king of animals), the second of animals of prophecy. The symbolism is mentioned in Mark, or because his Gospel begins with John the Baptist living in deserts, where lions live, either because a key feature of the Gospel of the kingdom of Christ and the animal is basil.
Luke (disciple of St. Paul, October 18).

The third of the symbolic animals of the ox (the king of pet) , attributed to the Evangelist Luke, and with it symbolized.
John (of Twelve, May 8).
The soarer is Gospel could not only be symbolized by the eagle (the king of birds) .
Let all read, listen to these blessings given to us, by our beloved Evangelists.