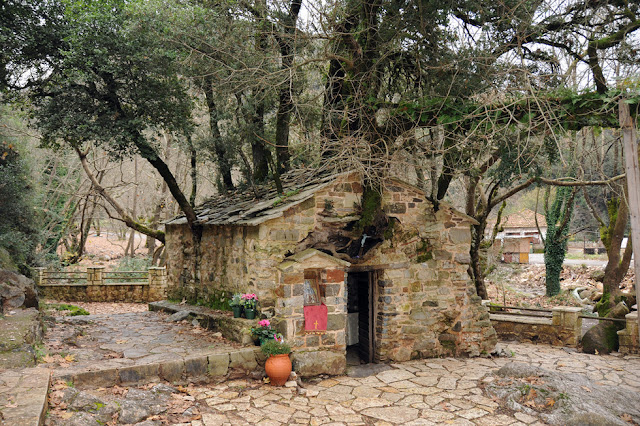 "The Greek Christian Orthodox Chapel of St. Theodora in Vasta, Megalopoli, Arkadia, Greece! A continuous and inexplicable miracle! 17 trees are on the roof of this church for over than half a thousand years. Some are huge other smaller! No way how to find where their roots are coming! Rapid wings are not able to take them from that small roof! The young saint Theodora has been condemned and beheaded for a false accusation! She didn't declare her innocence to save the life of the woman who falsely accused her (because then the other woman had to be condemned) !!!!!! Her last worlds were: "Oh Christ let my hair to be trees, my body a church and my blood refreshing water". The executors understood their mistake immediately when they discovered that she was not a man (she has been accused for being a monk that raped and left pregnant another woman who bore "his" illegitimate child). In fact she pretended to be a man so to live an ascetic and monastic life not to scandalize everybody in the wilderness. So with tears of repent they built a small chapel over her grave! Then one day a whole stream (or rather a small river) of fresh water passed underneath without destroying the fragile foundations of the small, plain, made by stones church! And by the years small trees were growing on the roof which became huge without having their roots to destroy the chapel!
It still stands there, in the Greek wilderness just to prove that any logical explanation stands not reasonable too!"
στις 15:57 No comments: