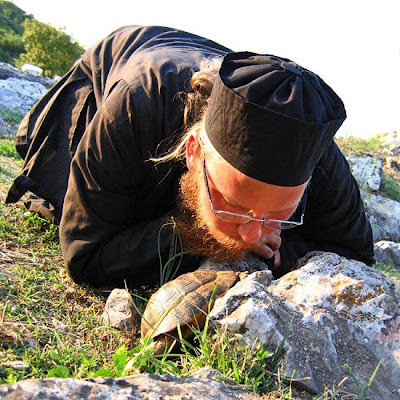 "Three days later, I moved into the apartment. Crazy John had helped me carry all my things. And when the transporter purposely dropped an innuendo because of my behaviour and the manner that I spoke, Crazy John stunned him, by pointing out to him that, as a person who systematically lived adulterously and behaved brutally towards his own two children, he had no right to make such remarks about me. The transporter was shocked by these revealing words, and he immediately stopped his sarcasm. I of course was under the impression that the two of them were acquainted, but was taken aback when the transporter turned towards Crazy John as he was leaving, and said:
"What are you anyway? Some kind of charmed one?"
"Yes George, I have been 'charmed' - by our Christ's love", the fool replied.
He even asked the transporter to stop sorrowing Christ, because, in spite of his overall behaviour, Christ had healed his daughter Theodora from a very serious ailment. George then departed, with his head lowered..... He is the gentleman who is sitting over there with his wife, and he can confirm the incident I just described.  I was impressed by that dialogue, but at the time I had dismissed it as the ravings of a fool.
So, on the evening of that same day, I dressed up in women's clothes as I normally did, and I went to a familiar transvestite haunt, on the main highway. You can imagine my surprise, when I spotted Crazy John watching me from the opposite corner of the block. The thought crossed my mind that he was seeking erotic companionship. But then, how did he find me?... The fool must have followed me (I thought to myself), and now he would go and tell what he saw to old Chrysoula... Oh well, I guess I will be searching for accommodation again... As all these thoughts were running through my mind, a prospective "customer" stopped in front of me. Just then, like a coiled spring, the fool jumped up and started to yell from across the road:
"He's got AIDS!!  He's sick and he will pass it on to you!!  Go away!! Go away!!"