The Dοrmitiοn οf the Theotokos 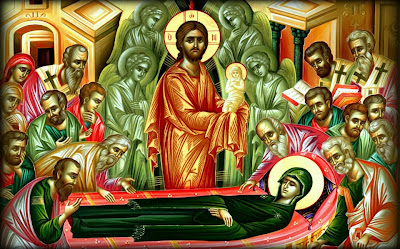 By His Eminence Metropolitan Panteleimon of Antinoes
It is not an easy task for anyone to describe the glory of the Mother of God. It is also extremely difficult to put into words the virtues and holiness of the Living Temple of God, namely the Holy Theotokos.
Now, let us investigate what the Bible says concerning the Theotokos. In Genesis, the first Book of the Old Testament, God promised Adam and Eve that from a virgin the Saviour of mankind shall be born, when He says to the serpent: "Because thou hast done this, thou art cursed above all cattle and all the brutes of the earth, on thy breast and belly thou shalt go, and thou shalt eat earth all the days of thy life. And Ι will put enmity between thee and the woman and between thy seed and her seed, he shall watch against thy head, and thou shalt watch against his heel" (Gen. 3:l5-l6). This promise is called "Protoevangelio" (the first Good News) because it is the first message that God gave man concerning the salvation of mankind. The virgin will give birth without having a relationship with a man, and the Child will crush the head of the invisible enemy, namely Satan. The image of the heel is used by God to prophesy the Crucifixion and the Resurrection of our Lord.