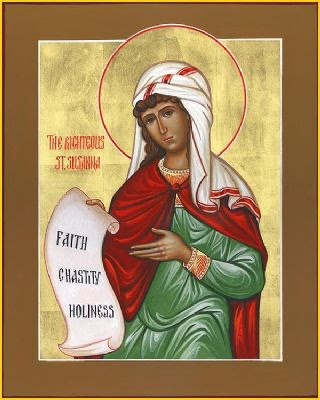 The Holy Martyr Susanna the Virgin was the daughter of Presbyter Gavinius and a niece of the Holy Bishop Caius of Rome (283-296). She was raised in strict Christian piety and in her youthful years dedicated herself to God. The family of the saint was related to the emperor Diocletian (284-305), who heard reports of her virtue and beauty.              Having decided to give St Susanna in marriage to his co-emperor Maximian (305-311), Diocletian sent his own kinsman, the dignitary Claudius, to the priest Gavinius, and then his own brother Maximus. Both of them, together with the wife of Claudius Prepedigna and her sons Alexander and Cythius, accepted Baptism after conversation with the pious family. Having learned that the entire family of his relatives had been converted to Christianity, Diocletian sent them into exile.
Soon they burned the martyrs at Ostia, not far from Rome, and threw the ashes into the sea. They took the holy virgin Susanna to the palace, and the empress tried to persuade her to submit. But the empress, secretly a Christian, supported the martyr in her intention to preserve her virginity for the sake of the Lord. She explained to the emperor about the virgin's unwillingness to enter into marriage with a pagan. Diocletian gave permission to his co-ruler to defile the holy virgin, but an angel defended her.
Macedonius began to urge the martyr to offer sacrifice to the idols. "I offer myself in sacrifice to my Lord," she answered. Then Macedonius cut off the martyr's head. The empress secretly buried the body of the saint. The room where the murder occurred was consecrated into a church by the holy Bishop Caius. Soon the father of St Susanna, Presbyter Gavinius, accepted a martyr's end, as did St Caius in the year 296.