A Recent Miracle of Elder Paisios in Serres 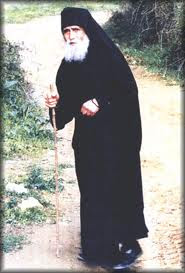 The following article is pre-published, and will appear in the September 2012 issue of the Greek periodical ΔΙΑΛΟΓΟΣ. The author has allowed for its distribution, because of the hard times we are living in, especially in .
A few weeks ago another contemporary miracle of Elder Paisios was received in a small . It was described by the subdeacon Amphilochios of the of the Archangels in Serres, as lived by Pantelis K.
Pantelis, 18 years old, a young drug user, had a terrible accident with his motorcycle just outside his village, which resulted in serious head injuries and he suffered a concussion. He was probably under the influence of substances because, although he was in rehab programs, this demon of heroine was not leaving him. He entered the intensive care unit of with head injuries.
The doctors had him in repression, and after an inpatient infection he was found to be in a coma with the final opinion being that he was brain dead. The doctors, having no other possibilities available to them, threw up their hands and told the bereaved mother that the situation was in God's hands.


The date of the final opinion of brain death was on July 13th. In one day her son would have been 18 years old, and instead of entering adult life, she saw him struggling in bed, not against the known battle of the scourge of drugs, but quite directly for his very survival.
The lovely Mrs. Anastasia would not put this down. With the exhortation of her Holy Spiritual Father, Papa Athanasios, she took the bus to the next day, and headed for the Holy Monastery of Saint John the Theologian in Souroti.
She knew of the greatness of Elder Paisios, but she did not know that on that day, July 14th, it had been 18 years exactly since the repose of the Elder. When she arrived and saw the people gathered, she was surprised, but when she was told that her only son was born on the same exact day the Elder reposed she almost fainted. She felt something that she still cannot describe. A union with the divine, the aura of the Elder, and in general that something good would come from this.
Despite the critical situation of her son, she did not use it to get ahead, but waited with humility and kneeling for more than four hours until it was her turn to venerate the place where Elder Paisios reposed. She prayed for her child and took some dirt from the grave, which she brought to her spiritual father, who after praying over it made it into a protective amulet. Mrs. Anastasia ran to the hospital and placed it underneath the pillow of her son.
That very same night she saw in her sleep Elder Paisios, saying: "Do not be afraid. Pantelis will become well."
The next morning Pantelis recovered and was healthy, something which the doctors were unable to explain. A sharp fragrance had invaded the room and it was later found that it came from the pillow of Pantelis, under which his mother had placed secretly the amulet with the dirt from the grave of the Elder.
The only thing Pantelis remembers from his dormancy, is the figure of an elder dresseed in black, telling him: "Come, get up my lad to go with your mother. Your kolyva are not on the belt. It will be a long time until we eat them."
From that morning Pantelis had an aversion to drugs and is healthy, reading and trying to enter university. He confesses to the spiritual father of his mother and he wanted this miracle his family lived distributed, by subdeacon Amphilochios.
"God, sometimes, when a person does not understand with the good, gives him a trial, to recover. If there was not a little pain, sickness, etc., people would become beasts, and would not approach God at all." - Elder Paisios
Translated by John Sanidopoulos
.johnsanidopoulos
στις 00:56