The teachings of elder Sophronios of Essex. Married life and the Jesus prayer 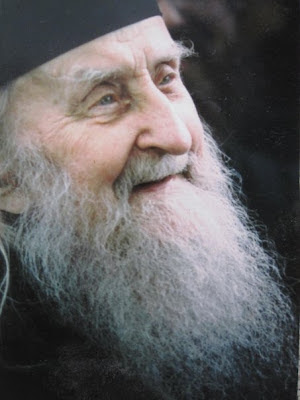 There are some people who wish to incorporate married life with the sweetness of prayer, praying like the ascetics.  But this effort cannot be accomplished. This is why married people become worried and distraught.  The prayer of the heart requires purity of heart and body.  We must discreetly guide and inform married couples that it is better to stop the prayer of the heart rather to stop communicating with one another for the sake of the marriage.  If the marriage fails then the husband will seek out another woman and most likely the wife will seek out another man, and if this happens, then all prayer is lost.  When the family disintegrates then prayer is lost.  Discreet coordination is required between the married and spiritual state guided by an experienced Spiritual Father.

OUR GREATEST MISSION IN LIFE IS THE DIVINE LITURGY

Our greatest missionary work in life takes place in the Divine Liturgy.  The Fathers of the Church would always build an Altar of Sacrifice in whatever country or city they traveled to.  And this is so, because when the heart is sweetened by the Divine Liturgy, it then seeks God.  It then desires to live an Orthodox ecclesiastical life, the heart of which is the Holy Eucharist.

I told the brotherhood that it should always be a priority for it to perform the Divine Liturgy in the Monastery.  The prayers of the Divine Liturgy should not be intoned for personal gratification because at that moment the priests are expressing the prayers of all those praying in Church.  And for this reason the priests should not be praying with self-centered feelings.  We do not celebrate as individuals.

THE LEADERS OF THE NATIONS DOMINATE ALL PEOPLE


AND THE GREAT ONES DOMINEER EVERYONE

In Paradise Adam lost the dialogue he had with God because of sin.  Christ, through His Incarnation, attempted to convince him, through repentance, to continue the conversation that he had with Him in Paradise.  He shouts, “repent.”  But God has changed the rules of communication.  In Paradise he said to him: “subdue the earth.”  Now he says to him: “You know that the rulers of the Gentiles lord it over them, and those who are great exercise authority over them.  Yet it shall not be so among you; but whoever desires to become great among you, let him be your servant. And whoever desires to be first among you, let him be your slave.” (Mt 20:25-27). In the beginning man was expected to become the ruler of the earth.  Now the earth is governed by the rulers.  This means, whoever wishes to be saved must become the servant and the slave of everyone else according to the example of Jesus Christ.  The rules have been overturned and this is the way repentance is expressed.