A Sermon on St. Mary of Egypt 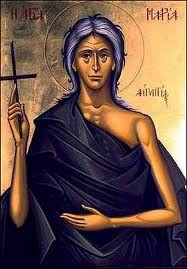 Committing Sins and Committing to God: A Sermon on St. Mary of Egypt
Orthodox Christianity records many accounts of conversion experiences. Throughout her long history the Church has commemorated thousands of men and women saints whose former unethical and undesirable lifestyles were transformed into a wholesome Christian existence of submission and obedience to the will of God.
By God's grace, the one-time rulers, persecutors, tax collectors, prostitutes, thieves, and murderers, today make up our canon of saints. This reality bears witness to the Church's raison d'être; to why our Lord established the Church within the world. The Church is God's ultimate vehicle for transforming people's lives. The Church's main purpose is to heal, sanctify, and save all believers.
In Orthodox theology, the Church is properly called the "redeemed community" of Christ Jesus, a union of sinners constantly struggling and growing toward God's eternal Kingdom, of which the Church offers only a glimpse. To suggest that the Church exists only for the holy and worthy is to undermine its whole nature, if not ridicule Christ, who came into this world to save sinners and established the Church to continue this ministry of conversion and salvation.
The life of St. Mary of Egypt
The saints of the Church then come right out of the ranks of us sinners. On this Fifth Sunday of Great Lent, the Church remembers and honors one such sinner turned saint: Mary of Egypt. Her life is extraordinary. St. Mary was an individual who represented a cross section of the immoral, fallen world of her day, a woman whose powerful conversion experience from a life of prodigality to a life of holiness and purity has been the focus of much admiration among the Orthodox.
St. Mary lived during the fourth century A.D. At the tender age of twelve, she relocated with her parents to the prominent metropolitan city of Alexandria , in Egypt , where she lived on her own for seventeen years as a loathsome prostitute. So enveloped was the young Mary in her sexual sins that many times out of desperation, she sought out clients for herself without requesting any payment in return. Her fellow citizens looked down on her lowliness as a harlot and treated her with the utmost disrespect. Mary in turn resented her accusers, living in seclusion, and realizing that she was willfully throwing her life away.
Until one day . . .
A group of Christians gathered to embark on a pilgrimage to Jerusalem for the solemn feast of the Elevation of the Cross. Driven by curiosity, Marytagged along with the group. When the Alexandrian Christians arrived in Jerusalem , they headed immediately for the Church of the Holy Sepulcher, Christendom's most sacred shrine, built over the place where our Lord was crucified and the tomb from which He rose.
As Mary reached the gates of the church, some invisible power obstructed her from physically entering in. Pious worshipers passed her on either side and made their entrance, but Mary's limbs seemed to become stiff and petrified. As Mary peered into the church, she saw every Christian falling to his knees as the Precious and Life-Giving Cross of Christ, still fully intact, was raised and processed around the sanctuary. Mary's gaze then fell upon an icon of her namesake, the Blessed Virgin Theotokos, and immediately, Mary also dropped to her knees in deep contrition, weeping uncontrollably for the sins she had committed. 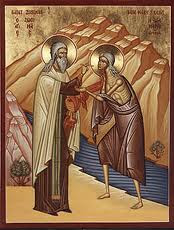 Leaving the church, she returned the day after, this time able to physically enter and venerate the Precious Wood. At that moment, Mary decided to change her life by dedicating the remainder of it to God through repentance. That same day, she left the Holy City , crossed the Jordan River , and entered the desert, where she lived in all piety, humility, and poverty for 47 years.
For almost half a century, Mary engaged herself in strenuous fasts and prayed to God unceasingly, repenting over her former life and praising the God whose mercy and compassion back in Jerusalem made her aware of the seriousness of her spiritual condition and saved her.
Toward the end of her life, St. Mary sent word to a priest named Zosimas to come to the desert and offer her Holy Communion. St. Zosimas came to the dying Mary on Holy Thursday and communed her. Returning the year after to the same place in the desert where he had last seen St. Mary, Fr. Zosimas found her dead, asleep in the Lord.
Miraculously, he found her body undecomposed and uncontaminated, fragrant with the grace of the Most Holy Spirit of God. Next to her body there lay a note, written by St. Mary's own hand, which read: "Father Zosima, in this region bury the body of the lowly Mary. I surrendered my spirit the same day that I communed the Precious Gifts. Please pray for me." Edified by this miraculous woman, St. Zosimas offered St. Mary a Christian burial. Church historians place the date of her falling asleep as April 1, 378 or 437 A.D.
The meaning of the life of St. Mary of Egypt
Two aspects of St. Mary of Egypt 's life stand out and are worth noting. First, Mary's complete immersion in her sins made her cognizant of just how serious her spiritual state was. Second, God's full-force attempt to transform Mary's life made her abundantly aware of just how much God loved her and how much she desired to follow Christ and serve Him. Let us examine both aspects in greater detail.
Mary's complete immersion in her sins made her aware just how serious her spiritual state was. Like most harlots and people of ill repute in her day, Mary had no time (and made no time) for personal meditation and inner spiritual assessment. She offered herself from client to client, blinded by her transgressions. She did not realize she was spiritually ill. She did not know there was something really wrong with her. Then her past struck her in the face like a brick, then was her heart pierced with the pain of knowing how many souls she led to the gates of hell, including her own. Mary's immersion in sin was the final motivating force behind her conversion. It proved, in the end, a great blessing, because it reinforced in her heart and mind the severity of her sinfulness and the immediacy of conversion.
If Mary of Egypt had sinned only a few times, then repented, and again fell into the same sins, her conversion process not only may have been lukewarm, but also may never have occurred at all. A little sprinkle of rain will not cause a person to run inside for shelter, but a violent downpour will. St. Mary experienced this "downpour" of sins, this unrelenting storm in her spiritual life. With God's grace, she ran for cover and was saved. For this reason must we never gossip or condemn or criticize others because, believe it or not, they may very well become tomorrow's saints, like Mary of Egypt.
God's full-force attempt to transform Mary made her realize just how great God's love for her was. Many times God reveals His power to us in a physical, materialistic way, in a way He knows will appeal to and be understood by a physically minded world. Before Christ spoke to people's souls, He knew that He had to make known His power on a purely physical level.
For St. Mary of Egypt , it was an "invisible forcefield" at the gates of the Holy Church . For St. Paul , it was a blinding light on the road to Antioch . For Lazarus' sisters, it was the bodily resurrection of their brother following his four-day entombment. In each circumstance, the recipients of the miracle do not simply become physically healed; instead, a deep faith and devotion, once dormant in them, now becomes alive and draws them into a deeper understanding and love for God. As Jesus says regarding Lazarus: "This [Lazarus'] sickness is not unto death, but for the glory of God, that the Son of man may be glorified through it" (John 11.4). The same with the blind man (John 9.3). God's love is mysteriously manifested through the actions He takes in people's lives ¬ actions which at times are quite harsh ¬ to induce more faith and thus to effect within them a spiritual as well as physical healing.
My dear people, the Church today lifts up St. Mary of Egypt as a prime example of repentance and conversion. In her life we witness two necessary extremes, which lead her to change: her complete sinfulness and God's sublime revelation within the Church of the Resurrection in Jerusalem . Sometimes such extremes, humanity going one way and God forcefully chasing after us, are blessings in disguise, ways in which God tries to redeem a lost situation and give to it meaning and direction.
Indeed, to know God fully in His goodness many times means we must encounter evil in His absence, or at least hardships. Then only can we truly appreciate His fatherly love and never again want to leave Him. Remember once again the Prodigal Son from the Bible. At the lowest point in his life did he "come to his senses" and return back to his father. The road, like the one St. Mary of Egypt traveled, was a long and narrow one, but it was also the most direct road to the Kingdom of God .

Fr. Stylianos Muksuris, BA, MDiv, MLitt, PhD (candidate), is a graduate of Hellenic College and Holy Cross Greek Orthodox School of Theology, Brookline , MA , and the University of Durham , Durham , UK , and specializes in Eastern Liturgy and Theology. His doctoral dissertation is entitled "Economia and Eschatology: The Mystagogical Significance of the Byzantine Divine Liturgy's Prothesis Rite in the Commentaries of Sts. Nicholas Cabasilas and Symeon of Thessalonike". He has also authored "The Anaphorae of the Liturgy of Sts. Addai and Mari" and the "Byzantine Liturgy of St. Basil the Great: A Comparative Study" (unpublished MLitt thesis). He may be reached at: profsgkm@yahoo.com.
Fr. Stelyios Muksuris
Posted: 24-Mar-07
στις 17:45