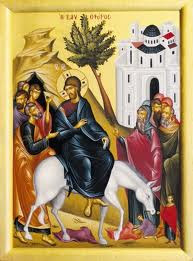 Avarice and envy destroy our lives

Today is Palm Sunday, and our Church celebrates the triumphant entry of Jesus into Jerusalem, six days before the Jewish Passover.
The Gospel tells us that Jesus was in Bethany, where He had stayed at the home of Lazarus whom He had raised from the dead and his family had prepared a dinner for Christ to thank Him and Lazarus was one of those at the table. Mary, the sister of Lazarus, came and brought precious spices and wiped the Lord’s feet with them and dried them with her hair. This really upset Judas the miser and he said: “Why do you needlessly waste so much myrrh? It could rather be sold and the money given to the poor”.
The Evangelist then tells us that this was not out of any concern for the poor, but rather that he was avaricious and a thief and he was in charge of the treasury and helped himself to the cash. Avarice is idolatry and when one becomes a slave to money, he loses everything. Judas the wretched bondman even sold Jesus. And it wasn’t as if he gained anything. No. He threw the money back at the feet of those who had given it to him, went and hanged himself and lost both the present life and eternal life.
Jesus then defended Mary and said that this action was for His entombment and that “…the poor you shall have with you always, but me you shall not”. Jesus is our fervent love, he is all that we have, our entire life … He is everything. Woe to him, though, who will be a slave to avarice and changes from being one who loves Christ to one who loves money.
There were large crowds in Bethany, because they had heard that Christ had gone back there after the raising of Lazarus, after hiding for a while because of the envy of the Jews. They were there to see both Jesus and the risen Lazarus. And the Scribes and Pharisees thought of killing Lazarus. How evil is envy! How greatly it destroys him who is envious and how much evil can it cause! They even wanted to kill Lazarus. But, could not Christ raise him again from the dead as He had already done? It is laughable. How incensed does one become when envious! How badly does he lose his mind!
On the next day, Palm Sunday, Jesus went to the Holy city of Jerusalem and there were very many people, both those who had been in Bethany and others who had heard that he would be coming to Jerusalem and they all came out to meet Him. The ordinary people love Jesus and express their adoration in many ways. They took palm branches in their hands and glorified Christ the Messiah and pre-symbolized His victory over death with these palms and laurels which are symbols of victory and immortality. Then the Apostles, once Jesus was on the foal of the ass and had entered the city as a humble and mild king, understood the prophecy of Zachariah who had foretold this entry ( the donkey is a symbol of peace, the horse a symbol of war).
The people were shaken by this entry of Jesus Christ. This is how people are. While the avarice and envy of those in authority destroy their lives, honest people and all good people, run to Jesus Christ who is riches, love joy and eternal life.
A blessed Resurrection!
στις 23:41