To the 2nd Salutations to the Theotokos 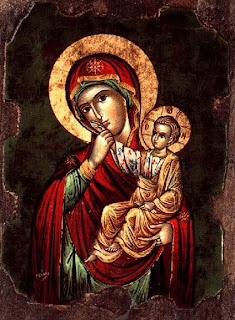 The incarnation of “Christ’s presence” was for man’s history the miracle of all miracles, the greatest of all miracles. Man because of his fall day by day was alienated from his God and Creator. AS time was passing, he was going down to the path of catastrophe. The heart of the fallen man was infected and his will was crushed.
From the ruins of man’s moral and spiritual condition, the joyful sound of the angelic hymns was heard, glorifying “the presence of Christ’s incarnation”.  The Word and Son of God is incarnated and becomes perfect man. God descends from heaven to raise man to heaven. The Son of God takes up all the human nature in order to make man a god. God the Word, who created man in the “image and likeness” of God, vests Himself with that which He Himself had created. The Son of God humbles Himself in order to correct the pride of His creation.
This incarnation of “Christ’s presence” was the saving solution which God provided to save man. Man by his own was unable to be saved and to restore his relationship with God. All men were guilty of sin. No one was just, so that he might offer the unique Sacrifice which was required “for the world’s life and salvation”.


This incarnation of God’s Economy, which is glorified by the angelical hosts, is realized by the Ever-Virgin Mary, who becomes the Mother the true “Lamb and Shepherded” Christ, Who as the God-Man saves every man who turns to Him.  The incarnated Son and Word of God seeks for the lost sheep, and finds it. He becomes the Good Shepherded Who carries on His shoulders the misled and lost man; and guides him to the Church’s salvation fold. Consequently, the Mother of God and Ever-Virgin Mary as “the Mother of the Lamb and Shepherded” becomes for the entire human race the “yard” of the “intellectual sheep”, in which the faithful take refuge in for protection and help.
Through the Mother of God heaven and earth rejoice and those “on earth dance together with those in heaven”.  The Mother of God, Mary, became the Ladder, which the Patriarch Jacob saw, which united heaven and earth. From this Ladder God the Word descended and by Her the faithful ascend to the heavenly places of Paradise. Henceforth, men become citizens of Heaven, heirs of God and co-heirs of Jesus Christ.
This hope the holy Apostles brought to the world. The entire world was expecting and when “the time was fulfilled”, the Son of God came. The One, Whom everyone longed for, came and men “reaching the unreachable, rejoiced” with a great joy. The Master of all, “although took up a form of a servant”, was not reduced of His Deity, but that which that which He was, remained, a perfect God. In the Incarnation, neither God the Word is reduced from His Deity, nor His humanity became God. But, the two Natures, Divine and Human, remain unchangeable and united hypostatically in the One Person of the God-Man Jesus Christ.
With the Economy of the Incarnation of God the Word the “uplifting of men” is realized. The restoration of Adam is completed. The first deception, which led the first-created to exile, ends and through the obedience of the Mother of God men “are freed” from the error of idols and are guided “to the enlightenment of the Truth”, Christ, Who is the “Truth” and the “Way” and the “Life”.
Without Christ, no one can achieve anything. Without Christ, life would have been without meaning. Without Christ, no moral virtues could ever exist.
All contemporary problems, which overrule the world, exist because Christ is absent from the Civil Authorities, from our families, from the Schools and Universities. When Christ is absent from our work, our relationships, our friendships and generally speaking from our personal and social environment, then the problems rule. For, where Christ is absent, there Satan rules. Where the Light is absent, there darkness prevails. Where the Morality of Christ is absent, there the immorality of the world prevails. Where the freedom of Christ is absent, there the slavery of sin prevails.
Why do we see the youth of our nation dragged as slaves under the influence of drugs and sinful relationships? It is because Christ is absent from their life. Implant Christ in your life and the entire world around you will change.
For this reason, the hymn-writer of the Akathist Hymn chants to the Mother of God, Mary, and characterizes Her as the one who frees everyone who turns to Her from the flaming assaults of the sinful passions.  “Hail, you who deliver us from the flaming passions”.  Whoever live in the darkness of sin, cannot enjoy the light of virtues. Although the Mother of God became the flaming column which guides “those who are in darkness” towards the Light of the Divine Life, ”from which flows honey and milk”.
Beloved brethren,
We are going through the second week of Great Lent and the Holy God granted to us extra time to turn our hearts and thoughts to Him. Let us take advance of this time and let us turn to repentance, so that we can be guided to the “promised land” and to cry out to the Mother of God: “Hail, Bride unwedded”.