Liturgy of the Presanctified Gifts 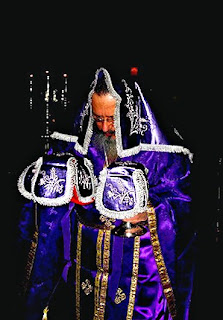 Communion during Great Lent: Because Great Lent is a season of repentance, fasting, and intensified prayer, the Orthodox Church regards more frequent reception of communion as especially desirable at that time. However, the Divine Liturgy has a festal character not in keeping with the season. Thus, the Presanctified Liturgy is celebrated instead; the Divine Liturgy is only performed on Saturdays and Sundays. Although it is possible to celebrate this service on any weekday of Great Lent, the service is prescribed to be celebrated only on Wednesdays and Fridays of Lent, Thursday of the fifth week of Lent (when the Great Canon of St. Andrew is read), and Monday to Wednesday of Holy Week. Common parish practice is to celebrate it on as many as possible of these days.

During Lent, many Orthodox faithful fast sometimes from midnight and sometimes the entire workday, not eating anything after the morning meal until they break the fast with Holy Communion at this evening service. They have this anticipation to help them with this somewhat difficult ascetic discipline.

Presanctified Liturgy: The service consists of Daily Vespers combined with additional prayers and communion. The communion bread has already been consecrated and intincted with the precious Blood and reserved at the previous Sunday's Divine Liturgy. Unconsecrated wine is placed in the chalice. Local practice also varies as to whether or not this wine must be thought of as the Blood of Christ. The only practical effect of this variety is that the celebrant who must consume all the undistributed communion at the end of the service might or might not partake of the chalice when he communes himself.

The service is preceded by the reading of the Typical Psalms, and the Divine Liturgy's opening blessing, Blessed is the Kingdom... is used at the start of the part of the service that resembles daily vespers. Psalm 103, Bless the Lord, O my soul is read. The Great Litany is then intoned and then Psalms 119–133 are read. Then the choir sings Lord, I have cried unto Thee with stichera. The priest makes an entrance with the censer. If the occasion is a feast, the entrance is with the Gospel Book and there is then an epistle and gospel reading for the feast day.

The choir sings O Gladsome Light, and the first reading, from Genesis (or Exodus), is read with a prokeimenon. Then the priest intones Wisdom, let us attend. The Light of Christ enlightened all men, and those praying prostrate themselves. The second reading, from Proverbs (or Job) is read.

In the second part of the service, the choir chants Let my prayer be directed as incense before Thee, after which the prayer of St. Ephraim is read. After a litany the choir sings Now the powers of Heaven with us invisibly do worship, and the presanctified Gifts are brought into the holy altar in a procession resembling the Great Entrance at a Divine Liturgy but in silence. There is no anaphora because the gifts are pre-consecrated.

The prayer of St. Ephraim the Syrian is repeated, and the Litany of Petition is proclaimed. The choir sings the Lord's Prayer, after which the priest intones: The Presanctified Holy Things are for the holy. The Holy Sacraments are brought out through the Royal Doors, and the faithful receive Holy Communion. After the Litany of Thanksgiving and the prayer before the Ambo ("Every good and perfect gift is from above..."), the believers venerate the Holy Cross.

Normally, the transition to a new liturgical day is complete with the reading of the evening prayer Vouchsafe, O Lord... But, since the hymns sung at "Lord, I have cried" belong—with some exceptions—to the new liturgical day, not the day drawing to a close, from the perspective of typicon, calendar, and rubrics, the transition to the new day is under way well before the evening prayer Vouchsafe, O Lord.

Since the prayer Vouchsafe, O Lord is not read in the course of the Liturgy of the Presanctified or at the service of Vespers with Divine Liturgy, the transition to a new liturgical day is not complete until the conclusion of those services. For this reason, the Presanctified or the Vespers with Divine Liturgy is considered as taking place on the day that is ending and not on the one that is beginning.

The significance is, if one receives Holy Communion on Friday at the Liturgy of the Presanctified, and again at Divine Liturgy on Saturday morning, one has communed on two separate days, and has not violated the principle that one should commune only once on a given day.

History: The Liturgy of the Presanctified Gifts was first documented by St. Gregory the Dialogist (AD 540-604), who was the papal legate to Constantinople. At one time it was supposed that he had come up with the idea himself, but now it is generally supposed that he simply recorded what was otherwise being practiced at Constantinople. In the Presanctified Liturgy itself, he is still commemorated as its traditional author.

This Liturgy is also mentioned in the Canons of the seventh century Quinisext Council:
στις 19:07