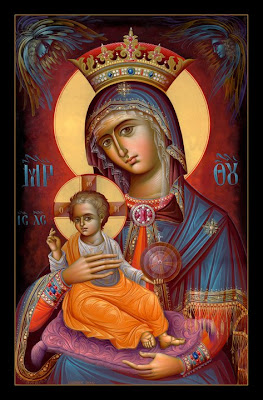 By
His Eminence
Metropolitan Panteleimon of Antinoes
On the second Sunday of Lent our Church commemorates St. Gregory Palamas, who played a leading role in the triumph of Orthodoxy at a very difficult time in its history.
St. Gregory was born in the Emperor's palace in Constantinople. He grew up there and was educated as a prince. Although the Emperor showered favours on him and established him in a high position, St. Gregory's heart leaned towards Christ. For this reason he left the palace at an early age and went to Mount Athos to become a monk.
His stay on Mount Athos enabled him to go deeply into the writings of the Fathers and to experience the fruits of the Prayer of the Heart.
The “Prayer of the Heart” or the “Jesus Prayer” is that of the Publican, "Lord Jesus Christ Son of God, have mercy on me a sinner", is a prayer that is repeated constantly and which has as its aim the cleansing of the heart of all thoughts and desires, so that he who prays, may with the Grace of God, experience the Divine Light.
The Divine Light is uncreated and is revealed only after great and intense spiritual struggle, which the monk undertakes under obedience to his Abbot or Spiritual Father. It is the same light that the three Apostles, namely Peter, James and John, saw on Mount Tabor, when our Lord was Transfigured before them. His face becoming as radiant as the sun and His clothes as white as snow. The vision of Divine Light may be vouchsafed to any Orthodox Christian who sincerely strives to clean his heart, soul and body, of all unclean thoughts and desires, thus becoming a true temple of the Holy Trinity. Our Lord promised that He would come down and make His abode in the heart of any man who loves Him and keeps His commandments.


Αn Orthodox Monk is ideally the manifestation of Christian love. He models himself on the lives of the Fathers of the Orthodox Church, because they embodied the Gospel teaching in a practical way. Outside of the lives of the Fathers, there is no Orthodox life and faith.
Today, we remember St Gregory who offers us an example of true Orthodox life and faith. He is chiefly remembered for his defense of hesychism against the attacks of the materialistic monk Barlaam. Hesychism or the quest for “Divine Quietness”, is a concept that was first offered by St. John Climacos and later refined by St. Nicephorus the Hesychast. According to St. Gregory and the hesychasts, the human body is sanctified by the Sacraments and participates through the senses in the prayer offerings. These views were challenged by Barlaam and his followers. Α great controversy ensued. Eventually Councils were convened and the teachings of St. Gregory Palamas were affirmed by the Church and were officially recognised.
St Gregory found the true meaning of Christian life. He was acknowledged as one of the Church's greatest scholars and was appointed Archbishop of Thessalonica in l349. He died at the age of 63 and his relics rest in Thessalonica. In the year l368 he was canonised as a Saint.
It is very important for us to have an example to imitate. Many thousands of examples are provided by the Orthodox Church in the lives of the Saints, which we commemorate throughout the year. The Saints were those men and women who imitated our Lord in their lives and being sanctified by His Grace became sons of God and heirs to the Κingdom of Heaven.
A church that does not produce Saints does not have the power to bestow salvation on their faithful. The Orthodox Church has always bome witness to the True Teachings about faith in Christ and this is proved by the multitude of Saints that have arised within the Body of the Orthodox Church right up until today.
Let us set a high goal for ourselves. Let us strive while we still have time to make our bodies and souls centres for the Divine Light. Through the virtues of faith, hope and love and the power of unceasing prayer, we may also become heirs of the Κingdom and participants in the glory of the Holy Trinity. Amen.