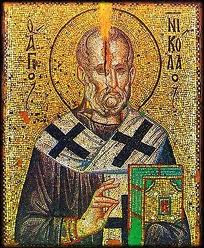 Saint Nicholas (Greek: Άγιος Νικόλαος [="victory of the people"]) (270–6 December 346) is the canonical and most popular name for Nikolaos of Myra, a saint and Greek Bishop of Myra (Demre, in Lycia, part of modern-day Turkey). Because of the many miracles attributed to his intercession, he is also known as Nikolaos the Wonderworker (Greek: Νικόλαος ο Θαυματουργός). He had a reputation for secret gift-giving, such as putting coins in the shoes of those who left them out for him, and thus became the model for Santa Claus, whose English name comes from the Dutch Sinterklaas. In 1087, his relics were furtively translated to Bari, in southeastern Italy; for this reason, he is also known as Nikolaos of Bari.
The historical Saint Nicholas is remembered and revered among Orthodox Christians. Saint Nicholas is the patron saint of sailors, merchants, archers, children, and students in Greece, Belgium, Romania, Bulgaria, Georgia, Albania, Russia, Slovakia, Serbia, and Montenegro.
Translation of his relics
On 26 August 1071 Romanus IV, Emperor of the Eastern Roman Empire (reigned 1068–1071), faced Sultan Alp Arslan of the Seljuk Turks (reigned 1059–1072) in the Battle of Manzikert. The battle ended in humiliating defeat and capture for Romanus. As a result the Empire temporarily lost control over most of Asia Minor to the invading Seljuk Turks. The Byzantines would regain its control over Asia Minor during the reign of Alexius I Comnenus (reigned 1081–1118). But early in his reign Myra was overtaken by the Islamic invaders. Taking advantage of the confusion, sailors from Bari in Apulia seized the remains of the saint over the objections of the Orthodox monks. Returning to Bari, they brought the remains with them and cared for them. The remains arrived on 9 May 1087.


Some observers have reported seeing myrrh exude his relics, anointing with which has been credited with numerous miracles. Vials of myrrh from his relics have been taken all over the world for centuries, and can still be obtained from his church in Bari. Currently at Bari, there are two churches at his shrine, one Roman Catholic and one Orthodox.
It is said that in Myra the relics of Saint Nicholas each year exuded a clear watery liquid which smells like rose water, called manna (or myrrh), which is believed by the faithful to possess miraculous powers. After the relics were brought to Bari, they continued to do so, much to the joy of the new owners. Even up to the present day, a flask of manna is extracted from the tomb of Saint Nicholas every year on 6 December (the Saint's feast day) by the clergy of the basilica. The myrrh is collected from a sarcophagus which is located in the basilica vault and could obtained in the shop nearby.
Proposed return of his bones to Turkey
On 28 December 2009, the return of St Nikolaos's bones to Turkey from the Italian government. Saint Nicolas himself wanted to be buried at his birthplace.
Legends and folklore
Another legend tells how a terrible famine struck the island and a malicious butcher lured three little children into his house, where he slaughtered and butchered them, placing their remains in a barrel to cure, planning to sell them off as ham. Saint Nicholas, visiting the region to care for the hungry, not only saw through the butcher's horrific crime but also resurrected the three boys from the barrel by his prayers. Another version of this story, possibly formed around the eleventh century, claims that the butcher's victims were instead three clerks who wished to stay the night. The man murdered them, and was advised by his wife to dispose of them by turning them into meat pies. The Saint saw through this and brought the men back to life.
However, in his most famous exploit, a poor man had three daughters but could not afford a proper dowry for them. This meant that they would remain unmarried and probably, in absence of any other possible employment would have to become prostitutes. Hearing of the poor man's plight, Nicholas decided to help him but being too modest to help the man in public (or to save the man the humiliation of accepting charity), he went to his house under the cover of night and threw three purses (one for each daughter) filled with gold coins through the window opening into the man's house.
One version has him throwing one purse for three consecutive nights. Another has him throw the purses over a period of three years, each time the night before one of the daughters comes "of age". Invariably, the third time the father lies in wait, trying to discover the identity of their benefactor. In one version the father confronts the saint, only to have Saint Nicholas say it is not him he should thank, but God alone. In another version, Nicholas learns of the poor man's plan and drops the third bag down the chimney instead; a variant holds that the daughter had washed her stockings that evening and hung them over the embers to dry, and that the bag of gold fell into the stocking.
The miracle of wheat multiplication
During a great famine that the Bishop of Myra experienced, a ship was is in the port at anchor, which was loaded with wheat for the Emperor in Byzantium. He invited the sailors to unload a part of the wheat to help in time of need. The sailors at first disliked the request, because the wheat had to be weighed accurately and delivered to the Emperor. Only when Nicholas promised them that they would not take any damage for their consideration, the sailors agreed. When they arrived later in the capital, they made a surprising find. The weight of the load had not changed. The removed wheat in Myra was even enough for two full years and could even be used for sowing.
The face of the historical saint
Whereas the devotional importance of relics and the economics associated with pilgrimages caused the remains of most saints to be divided up and spread over numerous churches in several countries, St. Nicholas is unique in that most of his bones have been preserved in one spot: his grave crypt in Bari. Even with the still-continuing miracle of the manna, the archdiocese of Bari has allowed for one scientific survey of the bones. In the late 1950s, during a restoration of the chapel, it allowed a team of hand-picked scientists to photograph and measure the contents of the crypt grave.
Formal veneration of the saint
Among the Greeks and Italians he is a favourite of sailors, fishermen, ships and sailing. As such he has become over time the patron saint of several cities maintaining harbours. In centuries of Greek folklore, Nicholas was seen as "The Lord of the Sea".
στις 15:11