CONTEMPORARY MIRACLES THE LIMITLESS POWER OF THE DIVINE LITURGY 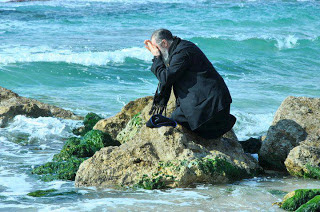 My dear brothers & sisters in the Living Christ, Glory be to God.
A group of villagers in Greece were digging in a quarry when suddenly a large section of the quarry collapsed and crushed those working there.  It appeared initially that everyone who was working in the quarry died. The wife of one of workers, Argiro, a very poor but pious women, believing that her husband was dead, requested that the village priest celebrate 40 Divine Liturgies in a chapel near where the accident took place for the repose of the soul of her husband.  She daily took a prosforo, a bottle of wine and a candle to the priest.  After the priest had celebrated 20 Liturgies, a demon became very angry with the great piety of Mrs. Argiro.
The demon, the greatest of all deceivers in the universe transformed himself into the likeness of a fellow villager that was known to Argiro. His plan was to dissuade the priest from performing 40 liturgies for the soul of Argiro husband.  He met her one morning as she was taking the πρόσφορο, the wine and the candle to the priest in the remote chapel. He said to you: “You should know that the priest cannot go to the Church today because he has an emergency.  You need not trouble yourself by going to the Church.  You can give him your offerings tomorrow.  The demon did this three times during the course of the forty days when the forty Liturgies were to be performed. With the passing of time, a big effort was being made to recover the bodies from the caved in quarry.   Forty days had elapsed since the terrible accident took place and they were digging ever deeper into the rubble.  As they were digging one day, they reached a point when they suddenly heard a voice.  It was a human voice that was saying to them; “Be careful, I am alive! Dig carefully, because there are two rocks hanging just above me and they could fall upon me and kill me.”
They were truly startled at hearing the voice and they continued digging very carefully around the area where they heard the voice.  They found a man alive and he happened to be the husband of Άrgiro.  They immediately told Άrgiro that her husband was the one found alive. They all wondered how it was possible for a man to stay alive for 40 days without food and water. In response to their amazement, Άrgiro husband told them the following amazing story. He told them that an invisible being would visit him every day to give him bread, a small container of wine and a lit candle. He said: “This is what happened to me during the forty days when I was buried except for three times when I did not eat; neither did I see a light.  I became very upset over this and I began lament over all the sins I committed in life.  I felt this way because   the invisible hand of God was no longer helping me.  At this point, I was ready to die from hunger and thirst.”


Later I saw the lit candle, the bread and the wine being delivered to me by the invisible being as I had seen it before and I glorified the name of God for not forsaking me and allowing me to be saved in such a miraculous way.”  When the people heard this amazing story, they glorified the name of God for they were all Christians and were astounded at this miraculous event happening before their very eyes.  So, you see my dear brothers and sisters in the living Christ what great power is vested in the sacraments of our Holy Church.  This is the power of our Orthodox Faith that is found in the Divine Liturgy and all the sacraments of our Church.  May we all be made worthy to experience such miracles in the life of our precious faith