A note about the life after death 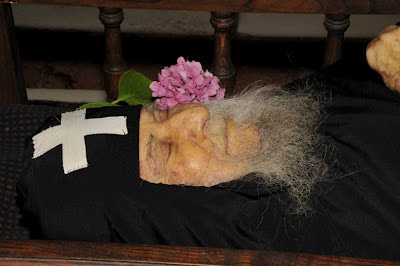 The Sacred Scriptures do not tell us how the particular judgment is carried out after the death of a man. We may only get a partial understanding of it from certain phrases which are found in the word of God. It is natural to think that at the particular judgment the good and evil angels play a large role in deciding the fate of man after death. The good angels are the instruments of God's grace, while the evil angels, or demons, are allowed by God to be the instruments of His justice. In the parable of the rich man and Lazarus, it is said that Lazarus "was carried by the angels into Abraham's bosom" (Luke 16:22). In the parable of the rich fool, the rich man is told: "This night thy soul shall be required of thee" (Luke 12:20). According to Saint John Chrysostom, the evil powers will drag it to judgment. In the words of our Lord, the angels of "these little ones ... do always behold the face of [the] Father Which is in heaven" (Matt.18:10). At the end of the world the Lord will send forth His angels, who will separate the wicked from the just and will cast them into the furnace of fire (cf. Matt. 13: 49-50). At the same time, our adversary, the devil "as a roaring lion walketh about, seeking whom he may devour" (1Peter 5:8); the very air is as if filled with the spirits of wickedness in high places, and their ruler is called "the prince of the power of the air" (Eph. 6:12; 2:2). Based on these indications of Sacred Scripture, the holy Fathers of the Church from ancient times have depicted the path of the soul separated from the body as a path through spiritual spaces where the powers of darkness seek to swallow up those who are spiritually weak; therefore, the soul needs for its defense the heavenly angels and the support of the prayers of the living members of the Church. Among the ancient Fathers Saints Ephrem the Syrian, Athanasius the Great, Macarius the Great, Basil the Great, John Chrysostom and others all mention these things.

These ideas are developed in greater detail by Saint Cyril of Alexandria in the "Sermon on the Departure of the Soul" which is usually printed in the Service Psalter. A pictorial representation of the soul's journey is given in the Life of Saint Basil the New. Here the blessed Theodora appears after her death in a dream to Basil's disciple and tells of what she saw and experienced after the separation of her soul and body, during the ascent of her soul to the heavenly mansions. The journey of the soul after its departure from the body is usually called the way of the "tollhouses." Of the figurative nature of these narratives about the tollhouses Metropolitan Macarius of Moscow notes: "We must, however, keep firmly in mind the instruction which the angel gave to Saint Macarius of Alexandria as he began to speak to him about the tollhouses: 'Accept earthly things here as the weakest kind of depiction of heavenly things.' We must picture the toll-houses, as far as possible, in a spiritual sense, which is hidden under more or less physical and human details." (Orthodox Dogmatic Theology)
father Alexander
στις 00:49