Sunday of the Samaritan Woman 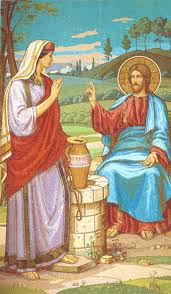 Christ is Risen!
Today is the fifth Sunday of Pascha, the Sunday of the Samaritan Woman, and the Gospel extract contains the unique and unparalleled dialogue between Christ and the Samaritan Woman.
The Lord was going to Galilee and passed through to find this great soul, who lived in darkness but was searching for the light. Man is a mystery and an abyss. Who judges whom and what can be said? So, the Lord sat at Jacob’s well near the city of – while the disciples went ahead into the city to buy bread and food – and He waited for the great lady from . She arrived at noon and the Lord began talking to her. He asked her for some water. She wondered though: how a Jew could ask for water from her. But the Lord wanted to get her to ask also for His Water, the Everlasting Water, His divine Grace, and His Divine salvation because He is the Source of Life and He gives the living water. He managed to get her to ask for the Everlasting Water. He brought her slowly to the knowledge of God and to His light. God is never in a hurry – the devil hurries.

And when the light of Jesus Christ shone on her soul, she wanted to spread the news to everyone she knew. She left her jug there because she no longer needed it and ran to the city. Christ had revealed to her that he was the Messiah and had spoken to her about the true worship of God. He gave her to drink of His divine Grace, the heavenly freshness.
It is amazing and moving to know that God chose a prostitute, a sinner, a dark and miserable woman whom no-one thought much of. He chose her to become a preacher and apostle of His Gospel. That is why the Great Martyr Fotini is regarded as equal to the Apostles. She illumined the hearts of the people, those of her compatriots that knew her, and they accepted her message. All together then ran to the Lord. This was contrary to the Jews who were complaining and grumbling about Christ and did not want to accept His divine Grace, thinking up all sorts of excuses. Those that followed Christ had only heard what the Samaritan Woman had told them. They lifted Christ up and praised Him and took Him to Sihar, their city, and begged Him to stay there. And He remained there for two days. Then they told the woman: “We do not only believe your words, but we believe now in what we have seen”.
This is the mission of the shepherds and the fathers and the preachers of the faith as well as of all Christians, to bring to Christ all those souls who genuinely seek Him, and Christ takes over from there. In Samaria Christ benefited the Samaritans who all proclaimed that Christ is the Saviour of the world, not only of the Samaritans and the Jews, but of the entire world.
Through the intercessions of St Fotini the Samaritan Woman, may Christ enlighten us all to draw near to Him and to receive His holy and saving Grace , and to pass it on to others. Christ will receive great joy from this and we and others will be saved.
Christ is Risen!
στις 04:15