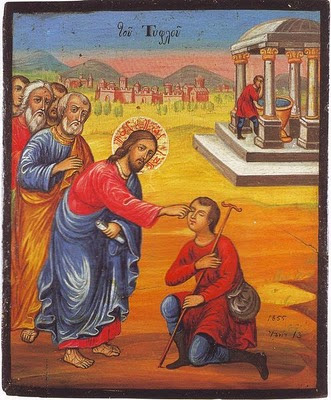 WHOEVER LOVES CHRIST, GIVES EVERYTHING FOR HIM

Christ is Risen! Today is the 6th Sunday after Pascha and is called the Sunday of the Man born Blind. The Gospel extract is very moving. The Lord Jesus Christ healed a man who was blind from birth. He gave him eyes to see and also gave him the light to see as well as the light of his soul. This is how the Lord is; He loves and cares for us all.
Persecuted by the evil of the Jews, the Lord was leaving Jerusalem and on the way He met the man born blind, who was a beggar. As God, the Lord saw in the man his soul, his life and everything about the man, and realized that inside this beggar and suffering man was a great treasure, a confessor of the faith and supporter of divine truth.
The Lord sees and knows us all. We know this. When we are in difficulty, He helps us. When everyone else ignores us and we have given up on ourselves and evil wars against us, inside us and beside us is the Almighty Lord, the best and safest friend.
Without the blind man having to ask for it, the Lord spat on the ground, made mud with the sand and spit, spread it on the man’s eyes and sent the man to wash in the font in Siloam. He did as he had been instructed – he went and washed, was healed and went home.

However, that is when his troubles really began, and he showed great patience and glory. His neighbours began to question him and to besiege him. They had a right to. Then the Pharisees began. Those who hated Christ tried not to doubt the miracle, they couldn’t – if they could they would have – but they tried to doubt the Miracle-worker, Christ Himself. When egotism, hatred and nastiness settle in our hearts it is a really bad thing. It is hell itself, it is a dreadful struggle, and is a destructive emotion for mankind, both for this life but especially for the next.
So, they began to interrogate him! With evil and hatred and machination they interrogated the poor healed man, instead of congratulating him and feeling happy for him for the good that Christ had performed in him, instead of running to find Christ to thank Him for helping a fellow man and giving him back to the community whole. Nothing like that!
They called him in again, and again, and again…trying to doubt the Miracle-worker Christ. The man though, stood up for Him in every possible way, with enormous faith, with unshakeable logical and theological arguments and in the end they lost their temper with him. That is when they planned the persecution. The man left as the victor. He stood up for his unknown benefactor with his whole heart. When one has purity and kindness and beauty in his soul and “love for all things beautiful is in his heart” as our national poet Dionysios Solomos says, he stands up for the merciful Christ, the Benefactor of all, our greatest joy, with his soul and his voice and his strength.
The Lord found him a second time, when he had been chased away, when he had confessed and had shamed his enemies. He asked him if he believed in the Son of God. And he, in his humility, between faith and faithlessness said: “Who is he, Lord that I might believe in him?” And He said: “It is I”. And the former blind man said: “I believe, Lord”. He confessed Him as Lord and God, God-man, merciful, miracle-worker and he worshipped Him.
If only we too could have the grace and blessing of this man, the former blind man, and if only our eyes too could be opened that we could see Christ, our Benefactor, so that we too could worship Him as is fitting!
Christ is Risen!