A MIRACLE BY ST. MENAS. 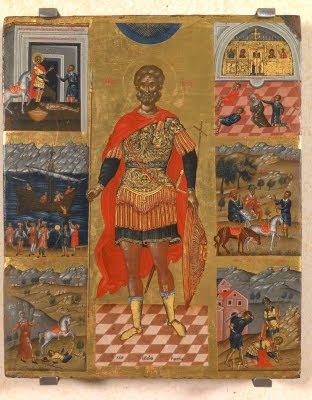 By James Drescher, "A Selection of Texts Relating to St. Menas. "

And there was a man at the shrine of the holy Abba Menas (a military martyr of Alexandria, early century) whose name was Mark. And he was a brickmaker by trade and was extremely poor. He had been ailing with his liver for a long time and had spent all that he had on the doctors, so that he lacked bread to eat. And this is the reason why he was poor. And he had five children and himself and his wife.

The archbishop of the local diocese asked about him and was told, "he has had a severe illness. But God and your prayers came to his aid and cured him. But he has fallen into extreme poverty."

So the archbishop sent for him and told him to make bricks at the shrine of the holy Abba Menas till it was completed; and he gave him alms. And the workman went and did as the archbishop had told him. And after some days the alms were spent and his children were again in need of bread, for, as we have already said, the man was extremely poor. At that time, the builders and locksmiths received their board and expenses daily, but this poor brickmaker did not; for it was not usual to give brickmakers their board and expenses but only their honorarium [Ed., A voluntary payment that is given to a person for services for which fees are not legally or traditionally required].

And while Mark, the workman, was still working, his wife sent to him from Alexandria, saying, "Why do you labor for nothing? Behold, your little children will starve to death here."

When he received his wife's message, he was exceedingly distressed. He said to his eldest son who was working with him, "Let us leave the work today and find out how things are at home. Blessed be God who requites [Ed., repays] us according to the sins we have committed." And his heart was troubled exceedingly as he thought upon the plight and distress of his children and he began to weep and lament.

While they were talking together, behold the holly Abba Menas himself came to them mounted on a whith horse AND IN THE GUISE OF A SOLDIER. HE SAID TO HIM, "WHY HAVE YOU WASHED YOURSELF TODAY? IT IS NOT YET TIME."

He said to him, "I am a poor man, my lord, and my children suffer from hunger. I wish to go and see them." Abba Menas, in the guise of a soldier, said to him, "Finish your work today and I myself will give you your wages to take home to your children."

And so the man worked till the next day, for he said within himself, "Better I go home with something than that I go empty-handed and my children starve to death through me."

Next day, at the ninth hour, the holy Abba Menas came to him again, still in the guise of a soldier, and the workman bowed and did reverence to him. The saint said to him, "Are you going to the city today?" He said to him, "Yes, if you please. If you had not told me, your servant, yesterday to wait till today, I should have gone yesterday to have news of my children, lest they starve to death."

The holy Abba Menas dismounted from his horse. He took a clay brick from those which the workman had made and said to him, "This is your wages. Take it home and live on it with your children and come back and finish your work."

The man was bewildered. He said, "If you are going to deal with me as you agreed, my lord, why, do so. If not, let me go and see my children so that they may not starve to death through me."

Abba Menas said to him, "This is your wages."

The man said to him again, "If this is my wages, why, I cannot fill my house with bricks." Abba Mena said to him, "Even if you can make them, nevertheless take this with you to the city till I come and give you your wages."

The man said to him, "If this is my wages, what shall I do with it?"

And when the blessed soldier was saying these things and the workman stood arguing with him, his son said to him, "Hush, father. We will take it with us to the city for him lest he beat you and you have a worse illness and we suffer from hunger. If you had not been ill before, this poverty would not have befallen us."

And the brickmaker held his peace. He took the brick and put it in basket along

with his mould. He went his way sorrowing. And when he was a little way from the soldier, he took out the brick, intending to throw it away.

His son said to him, "Nay father, lest he seek after it and not find it and beat us. I believe that he may be a soldier of the augustal rank who has given us this brick to take to the city for him and he will remember us by it and give us our wages. Unless he had wished to give us our wages because of our poverty, what would be the need of this brick in the city? Scarcely can we our bodies there and we are to carry this great burden.”

His father answered and said to him, "When we arrive in the city, we shall make a brick for him. Did I not make this one? I shall make this other also from the clay in the holders."

His son said to him, "Do you not know that this clay is different from the clay in the holders? Perhaps he wants this clay for some purpose. Give it to me and I will take it to the city for him; for it is better to bear a burden than bear the wrath of an augustal whom you cannot save yourself from."

And his son took the brick and carried it to the city. And when he got home, his mother spoke very despondently to him, saying: "If only you had been here, you would have drawn water for whomever wished it. We shall find our food from day to day." She also said to them, "Why did you not come the day I sent for you?"

He said to her, "A solder of the augustal rank cheated us, saying, "Do your work for me today and tomorrow I will give you your wages." Afterwards he cheated us of our wages and instead put another burden on us, telling us to take it to the city for him. And behold, it is in our basket along with our mould."

His wife put her hand in the basket and took out the brick, intending in her anger to throw it away. And when she had taken it out of the basket, she said: "You yourself do not know what he gave you, brother. I myself was surprised when you told me that he had given you a brick of clay. Behold now, I see that it is bronze."

Her husband cried out, "As the Lord lives, I made it myself with my own hands."

And while they were saying that it was bronze, behold it was transformed and became beaten gold. At once they knew that it was the holy Abba Menas who had given them the brick.

The man's wife said to him, "Perhaps it was really the augustal soldier and he gave you the gold brick, tempting you."

Her husband said to her, "Sister, do not disbelieve us. This was a clay brick, one of those which I had made along with my son, and the soldier took it in his hands and put it in our basket. And when we had got away from him, I took it out, intending to throw it away; and it was the same sort of brick as at the first. If my son had not stopped me, I would have thrown it away."

On saying this, they rose and prayed together in unison, glorifying the God of the holy Abba Menas.

Later on, the brickmaker went to the local market, approached the goldsmiths and said to them: "Be quick and weigh it." And they found that it weighed 53 litrae. With this gold, he had a gold paten made and a gold chalice and gave them to the shrine of the holy Abba Menas and he then among those which he had made that day. It was of fresh clay and smelled fragrantly. And the man realized at once that the holy Abba Menas had put it in the basket. He again made his way home and when he arrived there he again found the brick to be gold.

The man became very rich and he set to work again with a great joy that gave him no respite day or night. He subsequently reported the repeated marvels to the archbishop, who in turn, informed the emperor. The emperor honored the bricklayer with the rank of stratelates [Ed., driver/leader of the army].

And the people living in Alexandria and those living in Mareotis (the site of St. Menas' martyrium) rejoiced that God had visited his people and wrought great wonders in turning the clay bricks into gold.