Feast of the Dormition 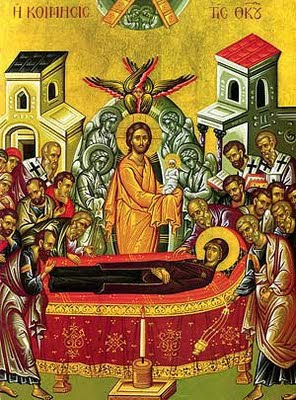 Today the Living Ladder is Assumed into Heaven

How does He, who dwells in the splendor of His glory, descend into the Virgin’s womb without leaving the bosom of the Father?
How is He conceived in the flesh, and does He spontaneously suffer, and suffer unto death, in that material body, gaining immortality through corruptibility?
And, again, ascending to the Father, He drew His Mother, according to the flesh, to His own Father, assuming into the heavenly country her who was heaven on earth.
Today the living ladder, through whom the Most High descended and was seen on earth, and conversed with men, was assumed into heaven by death.
Today the heavenly table, she, who contained the bread of life, the fire of the Godhead, without knowing man, was assumed from earth to heaven, and the gates of heaven opened wide to receive the gate of God from the East.