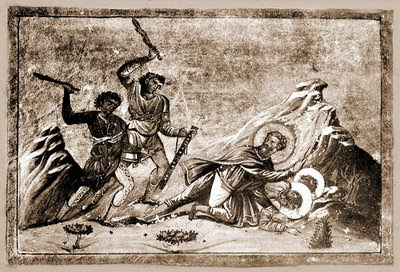 Born a pagan in Persia in the time of the Emperor Constantine, he came to know the Christian faith as a young man forsook his paganism and received baptism.

He was so enchanted with the true Faith that he left all worldly things and became a monk in a monastery near the town of Nisibis. He lived among the brethren for some time, then withdrew into silence, going to Archimandrite Urbel, of whom it is said that, for sixty years, he never ate anything cooked.

Urbel made him a deacon, but, when he wanted to make him a priest, Dometius fled to a distant mountain and settled in a cave there. He attained such perfection through fasting, prayer, vigils and meditation that he was able to heal the sick.

When Julian the Apostate came to that place, he heard of Dometius and sent men to wall him up alive in the cave, with two of his disciples. Thus died this saint of God, in 363, and went to the Kingdom of God.

“(Prologue). The Great Horologion says that Dometius and his disciples were stoned to death.