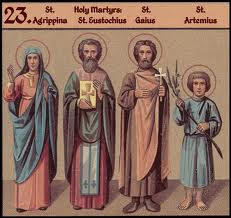 The Holy Martyr Agrippina, was by birth a Roman. She did not wish to enter into marriage, and totally dedicated her life to God. During the time of persecution against Christians under the emperor Valerian (253-259) the saint went before the court and bravely confessed her faith in Christ, for which she was given over to torture. They beat the holy virgin with sticks so severely that her bones broke. Afterwards they put St Agrippina in chains, but an angel freed her from her bonds.

The holy confessor died from the tortures she endured. The Christians Bassa, Paula and Agathonike secretly took the body of the holy martyr and transported it to , where many miracles were worked at her grave. In the eleventh century the relics of the holy Martyr Agrippina were transferred to .

Agrippina, purer than the lily,

Of God's Son, the betrothed,

Her soul, brighter than a flame

And her faith, firmer than a rock.

To the Lord she prayed, while being flogged,

Chanted psalms while enduring the wounds,

Forgiving everyone and blessing all,

As a pillar of blood, stood before judgment.

When her bones were crushed

An angel descended, the wounds healed!

But when new sufferings were imposed,

To God, Agrippina gave her spirit,

The soul departed, the body remained.

The holy relics of St. Agrippina

Are the defense of the ,

Medicine to the misfortunate and to the sick

And a protection from the battlesome hoards.

By the prayers of Saint Agrippina

May many miseries pass us by?