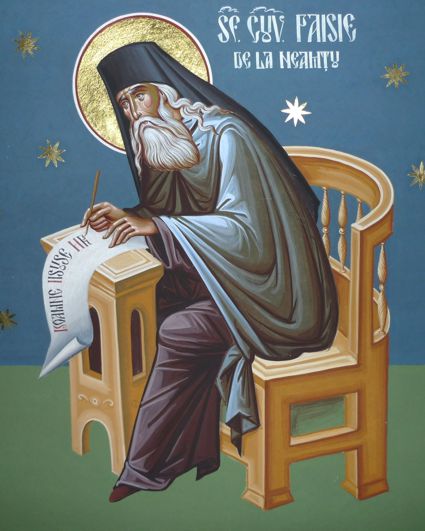 Saint Nikodemos the Haghiorite is an offspring of the island of Naxos in the Cyclades Islands. While young, he studied Greek letters in Smyrne under Ierotheos the Teacher. He came to the Holy Mountain in 1775 and was tonsured a Monk in the Sacred Dionysiou Monastery being renamed Nikodemos from Nicholas. In 1809 on July 14th he reposed, at 60 years of age.

Saint Nikodemos is a Saint unknown to most people even today, despite the fact that our Church from 1955 has officially proclaimed him a Saint and celebrates his memory.

Many visitors to the Holy Mountain don't know that in Karyes, the Cell, of the Skourtaion, houses the relics of his Holy Skull, and due to this ignorance they are deprived of the blessing of this treasure.

Saint Nikodemos has left a multitude of writings of incalculable spiritual Orthodox value which in summary are the following: The Philokalia, Evergetinos, Concerning Constant Divine Communion, Alphabetalphabetos, Handbook of Spiritual Council, All the Writings of Symeon the New Theologian, Confessional Handbook, Invisible Warfare, New Martyrology, Spiritual Exercises, Neon Eklogion, The extant Writings of St. Gregory Palamas, The Sacred Rudder, The Epitaphion Engomia, New Theotokarion, Christoetheia, Euchologion, The Catholic Epistles, Epistles of the Apostle Paul, Commentaries on the Psalms, Garden of Graces, Barsanouphios, Commentary of holy Haghiorite men, New Synaxaristes, Confession of his own Faith, Eortodromion, New Ladder, and a multitude of troparions, oikos asmatic canons and engomia to many Saints.

Saint Nikodemos the Haghiorite, does not only have an eminent place in the literature of the Greek Church, as a Father and Teacher who has written a multitude of writings, but by rights enters in as one of the greatest factors, in the area of the very stormy history of Orthodoxy. He lived at a very critical time of our Church's history, and the Venerable Nikodemos was called to play a primary role in the spiritual and religious life, clearing up the thickening clouds of Aristotelian scholasticism appearing from the West, and influencing a great number of his contemporary Greek Orthodox Scholars, who adopted this prevalent western spirit.

Saint Nikodemos the Haghiorite's work presents a very multifaceted radiance of the Spirit. Other than its voluminous side, the great role played by his work during that age of full illiteracy concerning pure Orthodox though, and the consequence which his very spiritual writings had on the subsequent course of the Church, has not been duly appreciated. However, Saint Nikodemos was fully conscious of the mission, which Divine Providence had for him. This is ascertained by his struggles against the Westerners and towards those "Orthodox", who perverted the Orthodox teaching.

Saint Nikodemos' work judged from the above mentioned viewpoint, in the time period of the final quarter of the eighteenth century creates the obligation for those occupied with it, to confess that the Venerable Father contributed, as no one else, during the post Byzantine years, in refuting the threatening wind, of western humanism, and in preserving the spiritual treasures of Orthodoxy.

At an age during which not only Orthodox spirituality was virtually unknown, but also those multifarious false beliefs, which were coming in "in sheep's clothing" in the courtyard of Orthodoxy," it would not be the least bit difficult for the rationalist spirit of "humanism" to infiltrate and satisfy those waning souls and have them accept the false spirit over the genuine one. The Venerable Nikodemos alone arose, to obstruct the foreign teaching and to reveal the sacred heritage of Orthodoxy to the Orthodox Church.

When the great personality of Saint Nikodemos draws more attention from the students of Church history and ends up an object of special research, then it will become apparent what work of huge importance proceeded from the holy mountain, through the most wise Saint Nikodemos the Haghiorite, and what consequences this work had for the later course of the religious life of the believers. Here we will limit ourselves to point out, that, had the Church not become familiar with the writings of Nikodemos, one after the other, which are very voluminous and completely faultless regarding truth and Orthodoxy, she would have undergone a period of uncertainty and would be ignorant of all that the divine pen of the Venerable Father wrote and organized with so much precision and fullness.

His great contribution is not only concerning the dogmas of the Church and the Sacred Canons, which he codified, simplified, and interpreted, but also the definition of the relationships between them and the points wherein they coincide in his Rudder. Also concerning the spirituality of Orthodoxy, which he wrote down in the "Spiritual Exercises", the "Unseen Warfare", and the "Eortodromion", and in General in all his writings, upon which he also placed the seal of holiness.

The very fact that one Ecclesiastical writer of tens of volumes of many pages manages to preserve the spirituality of Orthodoxy in a refined analysis, means that he "has the Spirit of God". Spirituality in the Orthodox understanding comprises the reflection of what proceeds from the heart, which is a product of a constant living of Christianity, of life in Christ.

It is difficult for one to truly apprise what sort of influence the work of Saint Nikodemos had on the course of the Church in an age, during which everything was characterized by lethargy and Orthodoxy comprised an unobstructed vineyard and easy pray for the "new demons" setting out from the West.

Our Holy Church honors her servant Nikodemos, because she did not present someone similar to him in the post Byzantine times. The Church also knows what a theologian means for that time, with the multi-faceted Grace of Nikodemos, with the rare talent of the Canonologist, the skill of the Academician, the elevation of the Hymnographer, the penetration of the Critic, the fullness of the Haghiologist, the mystagogicalness of the Liturgiologist, the experience of the Ascetical author, very rare charismas, all of which were wonderfully combined in one personality.

We could name Saint Nikodemos, a plaster cast of all the Christian virtues, a vessel of the unblemished and infinite cluster of gifts, an astonishing icon of Orthodox dogma, and a Teacher of universal authority!

Because we don't know many people in Orthodoxy doing "noetic pray" and authoring at the same time, preparing a "Handbook of Spiritual Counsel", while they are using the two-pointed mattock with the prayer rope in the left hand and the pen in the right hand, as the Venerable Nikodemos lived and also fought unto his last minute.

*Editors Note- This original Greek text written by lay-teacher Dimitrios Panagopoulos was published more than twenty-five years ago. Since then a number of this Saint's works have been published in many languages and Saint Nikodemos is becoming a teacher of universal authority. His books occupy a central position in the shelves of the traditional Orthodox world wide.

Translating and Editing: Palis and Zalalas