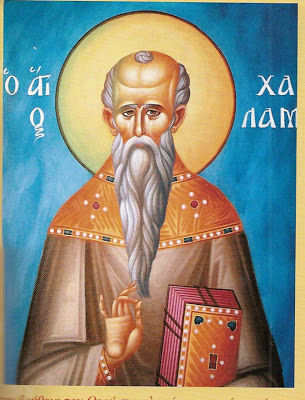 
"As pillar unshaken of Christ's Holy Church and lamp ever-burning to all the world, you emerged, O wise Haralambos. In all the world you shined with the martyrdom you suffered. You dispelled the dark night of the idols O blessed. Thence with daring do intercede to Christ that we may be saved." (Tone 4)

"You therefore, my son, be strong in the grace that is in Christ Jesus. And the things that you have heard from me among many witnesses, commit these to faithful men who will be able to teach others also. You therefore must endure hardship as a good soldier of Jesus Christ. No one engaged in warfare entangles himself with the affairs of this life, that he may please him who enlisted him as a soldier. And also if anyone competes in athletics, he is not crowned unless he competes according to the rules. The hardworking farmer must be first to partake of the crops. Consider what I say, and may the Lord give you understanding in all things…" (2Timothy 2:1-7)

In the early Church, the term "martyr" was originally used when characterizing the Apostles as witnesses of Christ's life and resurrection [Acts 1:8, 22]. Due to the persecutions that the early Christians endured, however, the term was applied to those who gave their lives for the Christian Orthodox Faith. In Greek, the word martyr means "witness" and, the verb form, martyred, means to "bear witness" or "give evidence."

Though martyrdom was not a constant experience for the early Church, it was a possibility with which the early Christians had to reckon. It was the consummate act of faith for as the Lord said: "Greater love has no one than this, than to lay down one’s life for his friends" (John 15:13). Before actually being executed, however, the martyr usually endured extreme physical and moral sufferings.

One of the saints recorded to have endured the greatest suffering of any martyr was the presbyter, Haralambos. As a second century priest in Magnesia, Asia Minor, he served his people with great faith and love. His reputation as a man of God had spread throughout the area and many people came to the Faith through his preaching the Good News of Jesus Christ. During a period of extreme persecution, Haralambos did not hide, but openly and boldly preached the Christian Orthodox Faith! When Haralambos was finally arrested for having the courage to preach the Gospel, his persecutors devised a plan of persecution for everyone to witness. Although he was tortured repeatedly, he never denounced his faith in Jesus Christ. For several months this persecution went on and not once did Haralambos weaken in his faith. Forced to suffer extreme pain and degradation, Haralambos continued to preach and many miracles and conversions took place among the people. When the soldiers thrashed the skin from his body Haralambos said: "Thank you, my brethren, for scraping off the old body and renewing my soul for new and eternal life." In the final moments of his life, moments before he was to be beheaded, Haralambos lifted his hands to heaven and prayed for all humankind: "Lord, You know that men are flesh and blood; forgive them their sins and pour out Your blessing on all." Following this prayer the saint gave up his soul to God and died without the sword being laid to his neck.