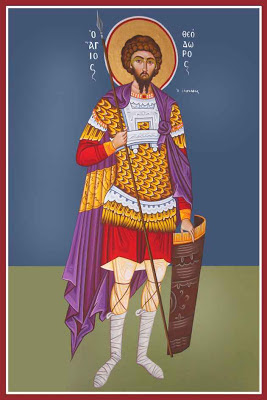 Great Martyr Theodore Stratilates (meaning “The Commander”) was born in Euchait (Marsivan in Asia Minor, presently Turkey) of an eminent family. He was well-schooled from birth in the military tradition, displaying excellence and aptitude for military science and tactics. Quickly rising through the ranks, he was only in his twenties when he assumed command of the garrison at Galatia. The Emperor Licinius soon recognized him as a brilliant general and an excellent peacetime administrator. Licinius decided to honor Theodore and to bestow on him the emperor’s highest award at a pagan celebration to be held in the city of Nicomedia.
St. Theodore realized that he would not be able to participate fully in the ceremonies and that the time had come when he would have to declare and witness for his faith. He had only one thing in mind, and that was to declare Christ publicly among the many Christians in the city.
The emperor brought a number of gold idols that were set around the place of the pageant, but at the direction of St. Theodore, the golden images were broken into pieces and taken away to be distributed among the poor. When the emperor demanded to know who had perpetrated this outrage, St. Theodore presented himself as the culprit and declared himself a Christian. He denounced paganism as he had so many years ago when he accepted Christ, and now he was prepared to die for his Savior.
At the emperor’s order, St. Theodore was flogged with more than 1,000 lashes on the back and stomach. He was then crucified and pierced through with arrows, and finally slain with the sword. During the whole of his torture, St. Theodore repeated unceasingly: “Glory to Thee, my God, glory to Thee!” He died and entered into the Kingdom of Christ in the year 319. He is regarded as the protector of soldiers. His wonderworking relics were taken from Euchaita to Constantinople and buried in the Church at Blachernae.
στις 14:58