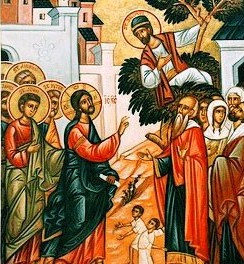 Luke l9: l-l0
By
His Eminence
Metropolitan Panteleimon of Antinoes
The Son and Logos of God had one basic aim, namely the salvation of mankind.  Man wandered far from the true knowledge of God and was anxious to find the truth which would guide him to salvation and the longed for union with his Creator.
Man’s mind and heart were darkened by sin, and as a result he did not attain to divinity as promised by the serpent in Paradise, "and the serpent said to the woman, you will not die. For God knows that, when you eat of it your eyes will be opened, and you will be like God, knowing good and evil" (Gen. 3:4-5), but the consequences of disobedience to God’s Commandment were catastrophic for mankind.
St. Paul in the epistle of Romans teaches us: ''Ever since the creation ofthe world his invisible nature, namely, his eternal power and deity, has been clearly perceived in the things that have been made. So they are without excuse; for although they knew God they did not honour Him as God or give thanks to Him, but they became futile in their thinking and their senseless minds were darkened. Claiming to be wise, they became fools, and exchanged the glory of the immortal God for images resembling mortal man or birds or animals or reptiles. Therefore, God gave them up in the lusts of their hearts to impurity, to the dishonouring of their bodies amongst themselves, because they exchanged the truth about God for a lie and worshiped and served the creature rather than the Creator, who is blessed for ever" (Rom. l:20-25).
More and more man gives his attention to material things rather than to things of spirit, and in his heart puts matter above all. He enslaves himself with matter and his inordinate desire for riches and material things often causes him to be unjust.
Man, drunk with greed, always wants more and more. Nothing satisfies him. He uses any and every means to increase his possessions with complete indifference to the needs and claims of his fellow men; he doesn't care if he exploits others; he doesn't care how other men are to live. The cries of the women he oppresses fall on deaf ears. Confronted with the hungry faces of children this cruel man feels nothing; his onlΥ aim is to be rich.


Such was the life lead by the chief tax collector, according to today’s Gospel. As chief tax collector, Zacchaeus was busy amassing a large fortune, based on the hard work of the other people. As a result of his injustice, exploitation and robbing of foreigners by confiscating their possessions, he begins to feel guilty.
Wherever he looks in his house, he sees the fruits of his injustice and cruelty. His ill-gotten possessions begin to condemn him and gradually remorse quickens his heart.
At that moment, news of Jesus' arrival in the city reaches him. Αll the people are running to see the Son of David. Within moments the narrow streets of Jericho are crowded with hundreds of people pushing and shoving each other in the hope of seeing the Great Prophet.
Zacchaeus also wanted to see Jesus. He tried to approach Him, but it was impossible.
Even his high social standing availed him nothing. The people, their attention taken up completely with Jesus, ignored him. Running ahead, Zacchaeus climbed up a sycamore tree, the better to see Jesus. When Jesus drew near, He looked up and seeing him, said, "Zacchaeus, make haste and come down; For Ι must stay at your house today" (Luke l9: 5). Full of joy, Zacchaeus descended and received Him. But that was not the end of it. In  public he acknowledged his former misdeeds and promising to make amends said to Jesus, "Lord, the half of my goods Ι give to the poor and if I have defrauded anyone of anything, Ι restore it fourfold" (Luke l9: 8).
His expression of true repentance assured Zacchaeus and his family of salvation.
In Zacchaeus’ s life we can see our own lives reflected. Every man and woman, young or old, wishes to have complete knowledge of and a direct relationship with his Creator. Man longs to satisfy both his material and spiritual needs. There is no man on earth who does not desire to have a relationship with God. He seeks to meet with Him, but because of sin, which has caused the estrangement between man and God, the meeting is impossible. Sin stands as a barier between the Creator and His creation. For this reason, the Son of God came down to earth to destroy this obstacle and re-establish the relationship between man and God.
Man was unable to save himself and for this reason God sent His only-begotten Son, "for God so loved the world that He gave His only Son, that whosoever believes in Him should not perish but have eternal life" (John 3: l6).
Jesus Christ's aim was to find and save the lost sheep. He didn't come for the just, but for the sinners. He didn't come to cure the whole, but the sick. He came to free the captives and to give life.
What man can say, he is without sin and does not need to be saved? What man can claim to be saved through his own righteοusness and to have no need of the Sacrifice of our Lord?
When Jesus Christ came to Jericho He had one aim, namely to save Zacchaeus and to make of him an eternal example of actual and true repentance.
Zacchaeus surprised at Christ's love and over-awed by his Divine Presence, felt his heart soften. He saw clearly his .sorry condition and recognised his faults and misdeeds. The consequence of this illumination was the expression of his feelings of repentance. However, he went a step further and not only acknowledged his former errors, but wished to make amends for them. He didn't stop at receiving our Lord in his home, but wanted to restore his relationship with both God and his fellow man. Το this end he gave half of his property to the poor and undertook to return fourfold to those he had dispossessed.
Μy beloved sisters and brothers, Zacchaeus is and will remain an eternal example of repentance. It is our duty to imitate in our personal lives Zacchaeus's example of repentance.
The meeting of Zacchaeus with Christ was a personal meeting. It provided an occasion for the comparison between God’s Holiness and man’s sinfulness. Before Holiness sin cannot stand its ground.
The consequence of this personal relationship between man and God is the salvation of man; man is sanctified by the Grace of Christ. This sanctification is only possible with Christ and within His Holy Church, which is His Body.
Outside of the Church there is no salvation. Salvation comes whenever there is repentance, and repentance is man’s refusal of everything that deforms and disfigures his personality.
Christ came to save and to restore the image of God in man, which man had broken through sin, that is to say that by the Grace of the Holy Τrinity man is sanctified according to the words of the Lord, ''you shall be holy, for Ι am holy." (l Peter l: l6).
We must also show repentance for our misdeeds and through this repentance and the grace of our Lord Jesus Christ, we shall be forgiven of our sins through the Holy Sacrament of Confession. Amen
στις 16:29