Once I Knew A Saint 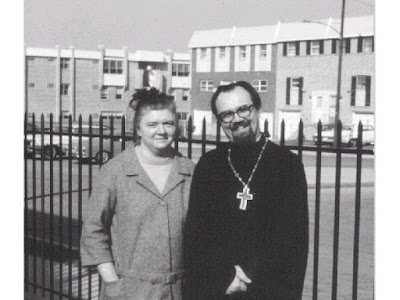 
As we drove away, with an invitation to return any time, I asked my friend how 'it' had been. 'He is incredible,' she answered. 'But, you know, in a way, it was really unnecessary. He answered every question I had before we went upstairs - while we were all sitting in the living room.' She paused. 'And, you know what else he told me?' she continued. 'What?' 'He said to me, Thank you for making John - human.'
Father Vladimir died after I had been in California for a few years, on September 4, 1991. He was seventy years old. At 9 o'clock on the night of September 5th, I picked up my phone and heard the voice of Father Mark, who had been my best friend at seminary and was now the priest in at St. Demetrius, in Scranton. As soon as he said hello, I replied, 'Father Vladimir's dead, isn't he?' He had died of cancer in a hospital in Scranton. He refused medication even though he was in terrible pain. The doctor said he had never seen anything like it - that he died 'like he was watching television.' He was completely lucid to the end. A few minutes before he passed away, Father Vladimir released his wife's hand. He took Father Mark's hand, and placed it on his heart. 'Find John,' he calmly told him. 'He needs you.'
Father Mark didn't have my phone number, he didn't know where I was, and he didn't even know where to start looking. He still doesn't know how he managed to find me. But I know. He found me because Father Vladimir has never died.
Editor's Note: Richard John Friedlander is the ecclesiarch of the Ascension Greek Orthodox Cathedral in Oakland, California, a professional mediator and arbitrator, and a contributor to Orthodox Christian News Service. He has been a tonsured Reader in the Orthodox Church for seventeen years. His spiritual travel book, "The Techno-Monks of Mount Athos," will be released by the Creative Arts Publishing Company in the Spring of 2003.
by Richard John Friedlander
στις 18:58