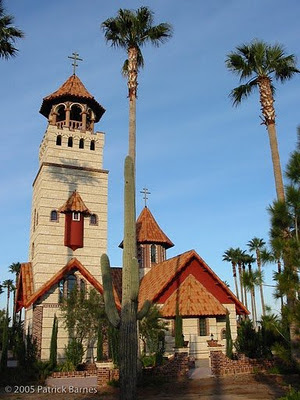 In the summer of 1995 six monks arrived in the southern Arizona desert to establish St. Anthonys Monastery, carrying with them the sacred, millenial heritage of the Holy Mountain, Athos. Elder Ephraim, a disciple of Elder Joseph the Hesychast, having restored and repopulated four Mt. Athos monasteries and having established several mens and womens monastic communities throughout Greece and North America, transferred six Athonite monks to the Sonoran Desert to start a new monastery. The monastery, which covers over 100 acres, is dedicated to St. Anthony the Great, the father of monasticism, the renowned 3rd century anchorite. There are chapels dedicated to Saints Seraphim of Sarov, Demetrios of Thessalonica, John the Baptist, George the Great Martyr, Nicholas the Wonderworker, and Panteleimon the Healer. The main church is dedicated to Saints Anthony and Nectarios the Wonderworker. The monastery follows the coenobitic rule of monastic life: a brotherhood of monks and novices holding all things in common follow a daily schedule of prayer and work under obedience to the abbot, their spiritual father. There are over 40 monks there today.
Visit the Monastery website here: www.stanthonysmonastery.org