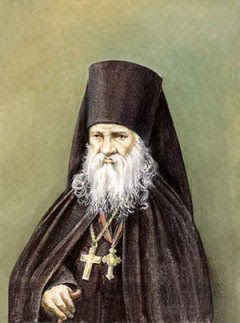 
Elder Macarius's face was scarred by smallpox, he stuttered and was always poorly dressed, but he was distinguished by a very refined personality. He was born to a landed gentry family, loved music and was a talented violinist. After some years' experience in the world as a bookkeeper, in 1818 he entered upon the monastic path at the Ploshchansk Hermitage. There he formed ties with Elder Leonid and followed him to Optina.

With Elder Leonid's repose, the burden of the spiritual guidance of the skete fell to Elder Macarius. He was soft-spoken and emanated a quiet joy in the Lord. Like Elder Leonid, he used his gift of spiritual discernment to work numerous healings, especially of the demon-possessed. He also carried on a tremendous correspondence: his letters of counsel fill two volumes, each numbering a thousand pages.

Elder Macarius did not tolerate idleness among the brethren. He introduced various handcrafts: bookbinding and woodworking. He also adorned the skete with mass planting of flowers. His greatest contribution to Optina, however, was to initiate its work of publishing patristic texts. This was historically significant, since Peter's reforms had greatly curtailed such activity, which subsequent laws restricted to ecclesiastical print shops. The result was that many works of Holy Fathers existed only in manuscript form or in very limited editions. Meanwhile, the secular press was churning out translations of mystical-philosophical works from the West, some of them plainly hostile to Orthodoxy. With the blessing and earnest support of Metropolitan Philaret of Moscow, and the active collaboration of the Orthodox writer and philosopher Ivan Kireyevsky, Elder Macarius began meticulously editing manuscripts translated from the Greek by Paisius Velichkovsky, which he had acquired in Ploshchansk, and other patristic manuscripts donated by various individuals, thus launching an undertaking which, in 50 years, produced more than 125 books in 225,090 copies. These were sent to libraries and seminaries all over Russia, putting into circulation the works of St. Isaac the Syrian, St. Symeon the New Theologian, St. Nilus of Sora, Elder Paisius (Velichkovsky), and others, and inspiring a growing circle of religiously inclined intelligentsia.

“To your question as to what constitutes happiness in life—whether it is grandeur, glory and wealth, or a quiet, peaceful family life—I will tell you that I agree with the latter, and I will also add that a life spent with a pure conscience and with humility brings peace, tranquility, and true happiness, while wealth, honors, glory, and high position are often the cause of many sins and do not bring happiness.

“People for the most part desire and seek well-being in this life, and tend to avoid sorrows. This seems to be good and pleasant, but constant well-being and happiness are harmful to a person. He falls into various passions and sins and offends the Lord, while those who lead a life of sorrow attain salvation, and for this reason the Lord has called a merry life the broad path: For wide is the gate, and broad is the way, that leadeth to destruction, and many there be which go in thereat (Mt. 7:13), while the life of sorrow He called strait: Strait is the gate, and narrow is the way, which leadeth unto life, and few there be that find it. (Mt. 7:14). Thus, out of His love for us and seeing its possible benefit for those who are worthy of it, the Lord leads many people away from the broad path and places them on the narrow and sorrowful path, in order to arrange their salvation through their endurance of illnesses and sorrows, and to grant them eternal life.”

“You not only wish to be good and not do anything bad, but you also wish to see yourself as such. The desire is laudable, but the wish to see one’s own good qualities provides food for vanity. Even if we acted sincerely and correctly in all things, we still would have to regard ourselves as unworthy servants. However, being faulty in all things, we must not consider ourselves to be good even in our thoughts. For this reason we are embarrassed instead of being humble. For this reason God does not give us strength for the execution of things, in order for us not to have pride in ourselves, but to attain humility. And when we do attain it, then our virtues will be strong and will not allow us to be vain.”

“We, weak-minded people, thinking to arrange our possessions, bustle around, despair, deprive ourselves of rest, only in order to leave our children a good estate. But do we know whether it will be of benefit to them? A foolish son is not helped by wealth—it only serves to lead him into immorality. We must concern ourselves with leaving our children the good example of our lives and rearing them in the fear of God and His commandments—that is their primary treasure. When we seek the Kingdom of God and His truth, all that is needful here will also be added (cf. Mt. 6:33). You will say: but we cannot do this, the modern world requires different things now! All right, but have you borne your children for this world only, and not for the hereafter? Comfort yourself with the word of God: If the world hate you, ye know that it hated me before it hated you. (Jn. 15:18), while the carnal mind is enmity against God. It is not subject to the law of God, neither indeed can be (cf. Rm. 8:7). Do not desire earthly glory for your children, but that they may be good people and obedient children, and when God grants it—kind spouses and tender parents, concerned for those serving them, loving to all, and tolerant of their enemies.”

“You wish to get nearer to God and attain salvation. That is the responsibility of all Christians, but it is done only through the keeping of God’s commandments, which consist entirely of love for God and neighbors, and even stretch to love for one’s enemies. Read the Gospel and there you will find the way, the truth, and the life; preserve the Orthodox faith and the canons of the Holy Church; study the instructions contained in the writings of church pastors and teachers, and arrange you life according to these teachings. However, rules of prayer alone will not help us do good… I advise you to pay as much attention as possible to works of love for your neighbors, to your relations with parents, spouses, and children, and try to bring up your children in the Orthodox faith and good morality. The holy Apostle Paul, enumerating the different types of virtues and labors of self-sacrifice, says: “Even if I do such-and-such, but have no love, there is no benefit to me.”
στις 23:34

Email ThisBlogThis!Share to TwitterShare to FacebookShare to Pinterest
Ετικέτες Elders