THE SUNDAY OF THE PRODIGAL SON 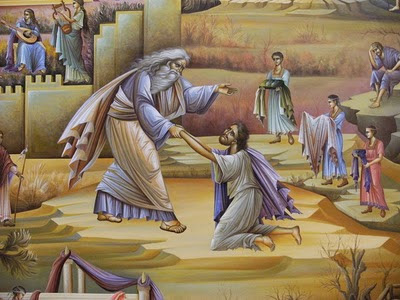 On this Sunday the Church tells the parable of the Father who had two sons. Like all parables, it has a symbolic meaning. Who is the Father and who are the two sons?
The Father represents God the Father, the Father of all mankind.
The elder son represents the Jewish people. The elder son represents the Jews, for alone of all people the Jewish people had kept the memory of God, accurately, faithfully conserving the stories of Creation, the story of the Fall of Mankind and the prophecies of the Coming of a Saviour, the Messiah. The Jews, the elder son, had remained with the Father.
On the other hand, the younger son represents the Gentiles, that is the pagan world. At the time of Christ, this meant the whole world except for the Jews. Unlike the Jews, the pagans had confused their memories of God the Creator with all sorts of false stories, myths and legends. They had confused the Creator with creation, and instead of worshipping God, they worshipped stones and rivers, the sun and the moon, kings and queens, thinking that they were gods and so making them into idols. The pagans, the younger son, had journeyed into 'a far country' and there 'wasted their substance'. In other words, they had distanced themselves from God, forgotten His Truth, so wasting their spiritual inheritance. As a result, they suffered from 'a mighty famine', in other words, from spiritual hunger, and so ate with 'swine', that is, ate with the illusions of the demons. However, they repented and turned back towards the Father, who welcomed them with open arms, running out towards them to embrace them. 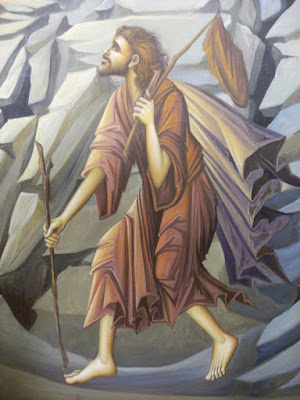 This parable is in fact a warning to the Jews. We can see this vividly portrayed in the icon of the parable which in the middle of the church. There we see the Father showing love and forgiveness towards the repentant son, who lies at His feet, begging forgiveness. The elder son, however, is angry, full of bitterness and jealousy. In hatred he says.
Perhaps we feel some sympathy with the elder son. After all, he never wasted his substance, he did remain loyal to the Father. The problem is that the elder son's service was a form of slavery, he did not stay with the Father out of love, but out of self-interest, in expectation of a reward. This was not love freely given, but an obligation fulfilled in the hope of the payment of the hireling.
We can compare this with the attitude of the Father. He instantly forgives all that the younger son, the pagan world, has done and says: 'Let us make merry'. The attitude of the Father is not gloom, but joy. The elder son, on the other hand, is full of gloom and cannot bring himself to be joyful or express love, because he has no love for his brother. The Father says: 'All that I have is thine', and shares everything. The elder son wishes to share nothing, for he is locked up in pride and self-love. Indeed, the elder son does not want to share in all that the Father has. Yes, he wants to share in His wealth and His property, but he does not want to share in what the Father has above all else - in His merciful compassion and love.
Thus we are reminded of the words of the Apostle Paul, that though we may have all qualities, if we do not have love, then we are nothing. In this way, this parable has a meaning for us.
We may have great wealth, but if we have no love, then all our wealth is worthless and our lives, like the lives of so many very wealthy people, are futile and purposeless.
We may have a wonderful job, but if we do not use it to create something positive, then it only satisfies our own vanity and has no real significance.
We may have a beautiful house or car, but if we use them only to flaunt our riches and feed our selfishness, then they serve no purpose.
Where there is no love, there there is only the emptiness of futile vanity and the gloom of selfish pride.
Therefore, let us too make merry, for Christ the King of Love makes joy even out of the most difficult problems and all we prodigals are able to return at any moment to the Father and be embraced by His love.
Rejoice, God is with us!
στις 22:03