ANSWERS IN RELATION TO THE FEAST OF THEOPHANY 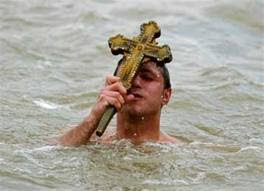 When Thou, O Lord, wast baptized in the Jordan,
the worship of the Trinity was made manifest! For the voice of the Father
bore witness to Thee, and called Thee His beloved Son!
And the Spirit, in the form of a dove, confirmed the truthfulness of His word.
O Christ our God, who hast revealed Thyself
and hast enlightened the world, glory to Thee!
[Apolytikion for Theophany]

On the 6th of January we celebrate Holy Theophany, the Baptism of our Lord Jesus Christ, which took place when our Lord was 30 years old. He was baptized in the Jordan River by the Forerunner and this was witnessed by God the Father through His voice and the Holy Spirit which appeared in the form of a dove. From the moment when our Lord became a man for our salvation, He fulfilled the entire Law throughout His life. When St John the Forerunner was baptizing in the Jordan according to God’s command, and as the Lord wanted to fulfill this Law too, once He was 30 years old, He approached St John, wanting to be baptized as all people were, despite the fact that He had no need of baptism as He was sinless. When St John saw Him, he said to Him: “It is I who needs to be baptized and yet you come to me?” But the Lord encouraged him and answered him “as I have fulfilled all the other commands of divine Law, so I must fulfill this one too”. Then John baptized our Lord who immediately came out of the water, while all others who were baptized remained in the water until they had confessed all their sins. Immediately, the heavens opened and the Spirit of God descended in the form of a dove and a voice was heard saying: “This is my Beloved Son in whom I am well pleased”.
In this way He passed on to us who believe in Him to be baptized with three immersions and so to receive the Holy Spirit and to keep ourselves as clean and pure as possible, from sin so that we may inherit the Kingdom of Heaven.
A few basic questions arise from this great feast of Theophany:

1. Why did Christ choose to be baptized even though He was sinless?
Baptism is redemption from the sins of humanity and a cleansing of original sin. Christ was sinless. So, why was He baptized? He was baptized in order to show us that the sacrament of Baptism is great and wondrous and is one of the seven sacraments of our faith. And in order to show that it is the first and great sacrament, He too was baptized and as is recorded in the Holy Gospel: whoever is not reborn through Holy Baptism cannot enter the Kingdom of Heaven.
2. Why was He baptized in the Jordan and not in any other river?
Christ chose the Jordan for His baptism, because many miracles had taken place in this river and it was sanctified and full of miracles. For example, it was this river that Joshua Son of Nun crossed with the ark and then, again, the waters of the Jordan pulled back and the priests carrying the ark were wet only up to their ankles. Also, when the Prophet Elijah crossed the Jordan with Elishah, the River Jordan opened up and dry land became visible for the Prophet to cross – there are many other instances also mentioned in the Old Testament. This is why Christ chose to be baptized there – because of the many miracles which had taken place in the river.


3. Why did the Holy Spirit descend?
When Christ was being baptized, the heavens opened and the voice of God the Father was heard saying: “This is my Beloved Son in whom I am well-pleased”. Because the Father was witnessing with these words, the Jews thought that the voice was speaking of the Forerunner. That is why the Holy Spirit descended in the form of a dove on to the head of the Lord, showing all that the voice was speaking about Christ.
στις 21:14